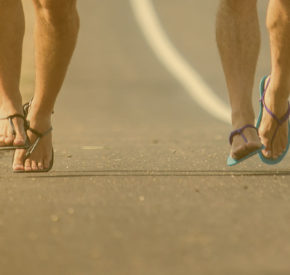 Steven Sashen says he’s still frequently recognized around his hometown of Boulder, Colorado and that he can’t walk through an airport without getting noticed. All that recognition can probably be traced to his stint on Shark Tank, the popular network television show where entrepreneurs pitch their nascent company to a veteran group of investors.

Immediately following his first appearance on the show, Sashen, the co-owner and CEO of Xero Shoes, says the company did three months of sales — in a single week. Traffic to the website still spikes during each of the many Shark Tank reruns CNBC has aired since the episode featuring Xero premiered in 2013.

Sashen has said in multiple interviews he wasn’t quite expecting the influx of eyeballs the company would receive from being on the show. The company experienced the “The Shark Tank effect,” which caused its website to crash and had the phones ringing off the hook until early in the morning. And though Sashen and his cofounder (wife Lena Phoenix) ultimately turned down the $400,000 offered by Shark Tank investor Kevin O’Leary, they were able to parlay that 15 minutes of fame into a successful equity crowdfunding campaign and millions in sales.

The initial burst of visibility, and the crowdfunding campaign that followed, gave Xero as solid base to grow from. Sashen stayed focused on the company’s core offerings and slowly expanded into product lines Xero’s most loyal customers would appreciate.

Building a product with your customers

When asked about how his business has evolved from a sandal company selling $20 do-it-yourself barefoot running shoe kits to a full-fledged “active lifestyle brand,” Sashen says he always knew there was more to his company than the core barefoot runner clientele.

We don’t do anything unless everybody in the office likes it.

Much of the company’s product line, Sashen says, actually developed as a result of listening to customer requests. Consumer concerns like, “I don’t like things between my toes” led to the company’s over-the-foot sandal line and “I need real shoes” led to the Xero’s movement into a full line of footwear.

But how did Sashen know when to pursue different products and expand the business? Trying to satisfy every product request is a fool’s errand that can lead to a bloated product line and diminishing returns. For every request, Sashen asks himself a series of questions:

Finally he asks his most important question: Will we like it?

“We don’t do anything unless everybody in the office likes it,” he said. Of course, some of this is still up to chance — relying on some gut instinct and hoping their customers will be as excited about a new product as Xero’s own team. “We know the products people would be interested in. We know the footwear they may want to buy. Some of it is crossing our fingers.”

All these questions are important, because making footwear is an 18-month process, and a signature brand staple could last forever.

The strong response to existing products influences the company as well. Xero receives emails on a daily basis from customers explaining what they like, but would have made differently. There have been instances when the company has completely restructured a shoe based mostly on consumer desire to see a change.

It’s not all smooth sailing. Sometimes Xero expands its market and the company’s core clientele ask, “why this?”

Sashen gives an example of a recent product, the TerraFlex lightweight trail running shoe, which was specifically constructed for aggressive trails. Some customers believed the product didn’t give the same barefoot feeling as the other products the company offered. It was an example of the marketing challenges Xero faces.

What does Xero do when some of their customers think the company is X but perceive a new product as Y? Sashen likes to take these opportunities to clarify that the company is a lifestyle shoe company and that their main goal is natural movement. He also says the company wants to expand their offerings in a way that expands their market.

“We do almost every shoe because it will expand our base,” says Sashen. An aggressive trail shoe expanded their market, and it was something Sashen felt worked within their natural movement ethos.

One lesson here is that while companies should strive to stay true to their core beliefs and expand in ways that don’t alienate their best customers, you can’t please everyone all the time. When, for example, Xero began receiving requests for leather shoes that would work in an office setting, the company, which had previously sold exclusively vegan-friendly shoes, created a lightweight leather dress shoe. Some vegan customers weren’t happy about the new shoe, but it fit with the natural movement concept and allowed Xero to reach new consumers. Xero still offers more than a dozen vegan-friendly options, so Sashen asked unhappy customers to consider those instead.

Building a brand with influencers

Xero doesn’t just rely on its customers for product development, they also lean on them for marketing. Their equity crowdfunding campaign worked so well because it didn’t just infuse the company with a bunch of cash, it also cultivated a mini-marketing army by identifying true fans so excited by Xero Shoes, they were willing to put money into the company. Since people owned a piece of Xero, they were naturally incentivized to help sell the shoes.

Sashen and his team also use customer data to identify influencers. Xero analyzes data to figure out the overarching characteristics and demographics of its consumers. Knowing who is using your brand is just a portion of today’s marketing equation, says Sashen. The best kind of endorsement a brand can have, is one that comes via a recommendation from a trusted friend, and those are the kind of recommendations that Sashen seeks out for Xero.

In many ways, Xero Shoes owes its very existence to this kind of “friend marketing.” Sashen started the company after participating in a local barefoot running group in Boulder, Colorado. Later conversations about the product, on forums, at trade shows, and with like-minded natural movement enthusiasts fueled Xero’s initial growth and evolution. One form of friend marketing is influencer marketing, a sort of natural progression where product recommendations don’t come from friends, but instead come from trusted gatekeepers (athletes, celebrities, vloggers, etc.).

Influencer marketing is something that Sashen employs for Xero, but he does so carefully and with a healthy dose of wariness. Influencer marketing is nothing new, of course. Celebrities and superstars have been hawking products for a long time (as far back, perhaps, as the mid-1700s when British pottery-maker Josiah Wedgwood used the endorsement of Queen Charlotte in his advertising), but what’s changed is the reach individuals can have over the internet.

Before, as a non-celebrity influencer, you could make a few bucks selling something like Avon products to your friends. Now the amount of money you can make as an influencer has gone up exponentially. So the new calculus for Sashen and others is to find influencers who can be helpful to your brand, without breaking the bank.

Influencer marketing has “become a transactional relationship more than a shared love of the product,” but it can still be used effectively.

There are also concerns that paid influencer marketing has lost some credibility. Sashen gets emails on a daily basis from people asking to post a paid product review on YouTube. An entire cottage industry has popped up to help connect companies with influencers. “It has become a transactional relationship more than a shared love of the product,” says Sashen of some of the bad actors just trying to cash in on the newest products and trends. (For example, the online mattress industry has become a nightmare web of paid relationships and untrustworthy review sites.)

Sashen worries too that some influencers have gotten spoiled, and paid far too much. “Companies that have money to blow have convinced people they are worth more than they are,” he says. Because an influencer might be making $10,000 from a competing product, even if they prefer his, there is an obvious disincentive to recommend his brand.

To find influencers to help sell Xero’s shoes, Sashen doesn’t only look at their total reach (though the ratio between fans, followers, comments, and likes is something he pays attention to). More importantly, he evaluates potential influencers based on the type of engagement they have with their fans. Does the person seem genuine and does it feel like his followers respect that realness? Sashen tries to align Xero with influencers who can genuinely recommend the products, and not just because of a financial incentive.

Xero Shoes has been successful because it has been able to tap into the media attention it received from Shark Tank to steadily raise its profile and grow its product offerings. While the company is still selling the do-it-yourself sandals it was founded upon, and Sashen says it continues to be a robust part of the existing business, the brand was built on evolving according to customer feedback and demand. It was also essential for Xero to align itself with the right people who would move the company forward.

From identifying die-hard fans willing to put their own money into buying a piece of the company to identifying partners who want to help sell the Xero brand, and not just because Xero was handing them a check, to using consumer input to inform product development choices, Xero has made sure its customers and fans remain its most important asset.