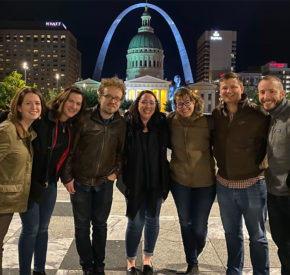 Every year, the team at Jilt (and SkyVerge) attends lots of events—from eCommerce conferences to developer meetups to events that help us get better at our individual jobs. One type of event that we love to attend are WordCamps.

We’ve always been very committed to the WordPress and WooCommerce communities, and attending WordCamps helps us stay connected, learn, and energizes us. Since we’re a global team, we attend a lot of WordCamps, and in 2019 that included WordCamps on three different continents! One of the biggest we look forward to each year is WordCamp US.

Seven of our team members arrived in St. Louis, Missouri last week (November 1-3) to checkout WordCamp US and we had an incredible time bonding as a team, reacquainting with old friends, meeting lots of new ones—and throwing a party for all of them! As usual, we also learned a ton about WordPress, WooCommerce, and the eCommerce industry while we were there.

Here are some of our thoughts, discoveries, adventures, and experiences from WordCamp US 2019 in St. Louis.

Our team attended several of the sessions at WordCamp US—and we got to present one as well. Beka led a session called “Unlocking six-figure eCommerce growth with automations.” (Keep an eye on WordPress.tv to check it out in its entirety—it got rave reviews, and we promise not just from our team! 😉)

There were plenty other sessions that stood out to our team, too. Here’s a taste of our favorites:

It’s pretty much impossible to attend a conference like this and not pick up some new knowledge. Here’s one quick tidbit that each member of the team learned over the weekend…

Jilt teamed up with WordPress news site Post Status to host an afterparty for the WordPress and WooCommerce communities (and anyone else interested in eCommerce) on Saturday night. We thought we’d get about 125 people to attend—then we got over 200 RSVPs. (We’d like to think it’s because we’re just that cool and not, as Deiva put it, “I guess everybody loves free drinks…”)

Even with that many RSVPs, we weren’t sure how many people would actually show up, but over the course of the night, more than 200 people came through our party. We had a lot of fun and a ton of great conversations, and it sure seemed like everyone else was enjoying themselves, too.

The party was at the Malt House Cellar in downtown St. Louis, a “very cool” venue according to Ryan (and he’s a jazz musician, so his opinion on such matters carries quite a bit of weight). Everyone who came had the chance to take some pictures, grab a Jilt/Post Status koozie, and drink and chat with members of the community. It was a great way to unwind after a couple of days of intense learning and amazing WordCamp content.

We decided to throw a party this year, because we wanted to provide a place to hang out with people from the conference in a more informal setting. “It was a great opportunity to meet some of the other folks, learn about what they’re working on, and to get to know them better,” said Lindsey, “Conferences can be a little intimidating for the more introverted attendees, but the party was laid back and fun, which gives those folks a chance to open up a little more.”

Beka agreed. “It was a nice opportunity to catch up with folks in more detail in comparison to chatting between sessions,” she said.

For Brian, who works with Jilt and founded Post Status, it was a case of worlds colliding.  “My favorite part was to see people I know and like,” he said, “and connect them with one another.”

The Jilt team is spread out all over the world, so it’s a lot of fun when part of the team has a chance like this to come together. “It’s always wonderful to see my teammates in person,” Beka said, “Which is an important part of work, even in a fully distributed company.”

The team bonding time meant a lot of dinners—”we ate just an absurd amount of delicious food,” according to Lindsey—and a lot of outings.

On Friday night, the team (along with our good friend Zack Katz from Gravity View) ate at a restaurant called Tony’s, where everyone raved about the food and how much fun they had—even if the atmosphere initially caught them off guard. Tabitha described it as, “feeling like a fish out of water in a posh restaurant with table service.” (While we certainly can be a sophisticated bunch, we are a company that dogmatically visits Denny’s on every team retreat, soooo…) Brian described Tony’s as “the world’s quietest restaurant.” Apparently not too quiet for him to share a story about how he was in a movie as a baby where Sharon Stone played his mom. We’re currently hiring a team of investigative journalists to dig up more information about that.

And three out of our seven team members even woke up early on Saturday to go for a run with some other WCUS attendees. The overachieving is strong with these three.

“If you have the opportunity to go to a WordCamp,” Max said, “Definitely do it. Especially the larger ones like WordCamp US and WordCamp EU, or the upcoming WordCamp Asia.”

And when you’re there, here’s some advice from the team on how to get the most out of your experience…

And if you’re going to be at WordCamp Asia in Thailand in February 2020—so will we. So make sure to come say hi to the team! 👋