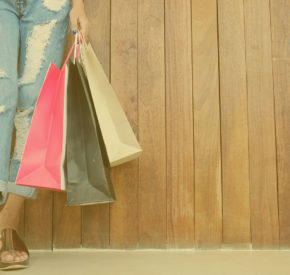 To the casual observer, it seems like the retail world is turning itself upside down.

Traditional retailers are falling like flies—Sears, Toys ‘R’ Us, Payless, Sports Authority, and Radio Shack headline the list of at least 57 retailers who have filed for bankruptcy since 2015. At the same time, born-online brands seem to be heading full speed toward brick-and-mortar. Warby Parker, Away, and Casper have all opened their own retail stores in recent years.

eCommerce and traditional retail brands alike are also discovering that marketing mainstays, like influencer recommendations, are no longer resonating with their audience. High-profile failures like the Fyre Festival have only increased consumer skepticism, and influencers continue to not disclose sponsored content, even after being threatened with public actions. Consumers are instead turning to user-generated content (UGC)—unpaid content that’s created and published not by brands or influencers but by other customers—to guide their purchasing decisions.

What makes all of these shifts particularly interesting for eCommerce retailers is how they’re inextricably tied together—and how they signal a tectonic shift in consumer buying habits that runs much deeper than the surface-level argument of online versus brick-and-mortar, or influencers versus user-generated content.

Let’s unpack why some of these shifts are happening—starting, of course, with cheese sandwiches.

The rise (and fall) of influencer marketing

If you haven’t watched Netflix’s cautionary tale about the Fyre Festival, it’s an entertaining inside look at how the festival quickly went from Instagram hotness to hot mess. (If Hulu is more your style, they made a documentary about Fyre Festival, too.) It makes for an interesting case study on how influencer marketing is shifting.

Influencer marketing has long been a successful marketing channel for reaching consumers en masse. Brands pay influencers—often mega-celebrities with large audiences—to post on social media, recommending products to their audiences. According to Digiday, 66 percent of marketers surveyed by content marketing firm Chute in 2016 had an influencer marketing strategy in place, and a report by Annalect (via ION) from the same year found that 49 percent of respondents relied on influencers for product recommendations.

There’s no question that influencer marketing is both popular and effective—but examples like the Fyre Festival raise important questions around trust. Many influencers have become fully pay-to-play, promoting content purely for profit rather than for the purposes of sharing their expertise or knowledge of the products. And it’s that product knowledge that makes influencer marketing so valuable. The research, insights, and deep understanding of the products are what helped influencers grow their audience in the first place; not just sharing product recommendations.

When influencers start and stop at pushing products alone, distinguishing between traditional advertising and organic earned media becomes nearly impossible. It quickly breaks down the trust that influencers have built with their audience, turning influencer marketing into the purely transactional pay-to-play partnerships we often see today.

Influencer marketing isn’t going away, of course. Influencers will continue to be important for brands—but more for building awareness or for product development than for driving conversions. Instead, individuals are becoming the new influencers in aggregate, with traditional retailers making user-generated content a central focus of their marketing efforts.

The power of recommendations

With more choices than ever for where to buy, consumers are naturally turning to the most trusted source of information: each other.

UGC is fast becoming a keystone marketing channel, particularly for the remaining traditional brick-and-mortar retailers. UGC encompasses any and all content created and uploaded by customers or unpaid brand advocates—content like social media posts, product reviews, videos, blog posts, and a variety of other formats.

What all of these forms of UGC have in common, though, is that they’re effective—much more so than influencer marketing. A report by Euromonitor found that consumers across the world are turning to their peers when deciding on products to purchase. From the report:

“Social media has given new meaning to ‘word of mouth’, with consumers increasingly using Twitter, WhatsApp and Instagram to share research, offer discount codes, swap secret deals and helpful hints to find new products, and to always get the best deal. Instagram recently revealed that over 400 million users use the Stories function every day.”

Sephora’s Beauty Insider Community is a great example of a traditional retail brand shifting more toward UGC-based marketing. Sephora’s community lets shoppers communicate directly with beauty experts as well as with fellow shoppers, making them better informed about their purchases and encouraging a sense of community and friendship. Anyone can be an “expert”—users recommend products based on their own experience and knowledge instead of being paid to express an opinion.

Unlike with influencer marketing, brands aren’t hiding information on the “bad” side of things (cheese sandwiches, anyone?) but are instead creating an army of “micro-influencers,” with the shoppers themselves becoming the voice of the brand.

In fact, some businesses are even formalizing that relationship—and moving their influencer marketing away from the Kardashians of the world and toward people with only a few thousand followers. Using micro influencers who are actual fans of a product or company can bring a lot of the same benefits as organic, UGC influencers. Someone with a small following feels more authentic, more honest, and more relatable. They can also target more specific audiences—if you’re targeting millennial women in Chicago and a micro influencer has a following of millennial women in Chicago, it gives the message a good chance to resonate.

Whether it’s UGC or paid micro influencers, cultivating those tighter relationships can pay off for present and future customers. More shoppers are checking reviews before committing to a purchase—data from 2016 shows that 64 percent of consumers are actively seeking out product reviews before opening their wallets. Consumers are also becoming more likely to leave their own feedback on purchases, giving themselves extra work in an effort to help others feel empowered by their knowledge.

UGC works so well (particularly for brick-and-mortar retailers like Sephora) because it closes the loop between brands and consumers. UGC invites open conversations and builds authentic relationships with consumers, a feat that traditional retailers have struggled to pull off in the past. The results for retailers include greater social engagement, higher conversion rates, better performance from their paid advertising, and—most importantly—happier and more loyal customers.

Which makes it all the more interesting that eCommerce retailers like Glossier seem, at first glance, to be driving in exactly the opposite direction.

Even as brick-and-mortar retailers are closing their doors, eCommerce brands are opening retail stores at a cracking pace. Glossier opened its flagship store in New York late in 2018; Everlane has two stores—one in San Francisco and one in New York; and Away has stores in seven cities across the United States and the United Kingdom. In fact, a 2017 study from Hero found that 67 percent of once pure-play eCommerce brands that received over $6 million in funding had opened at least one physical space during the three years preceding the study.

Brands are discovering that pure eCommerce sales can’t provide that sense of belonging to a brand community that comes with brick-and-mortar stores. “The brands that are winning,” Head of Marketing at Google Canada Fab Dolan told Shopify Plus, “Are the ones that understand and own the fundamental interplay between experiential and transactional. If we were to believe that retail is dead, then we should be spending all of our money doing online ads and guiding people to our website. And yet, what we’re seeing time and time again is that building anticipation and an appreciation for the magic of our products happens in the real world even though most people buy online or through call centers.”

The emotion that stems from these in-person experiences influences consumers across the board. Stores act as “shoppable billboards,” driving additional brand awareness and online sales in the cities where brands have stores. Away says that online sales have grown by 40 percent in the cities where they have opened stores, a “meaningfully greater” amount than in other markets.

But it isn’t just sales where brands are reaping the benefits. The brick-and-mortar stores give eCommerce brands a much-needed direct line to potential customers. eCommerce simply doesn’t give buyers the same experience as a retail store, where customers can touch, try on, or experience the products before purchasing. For certain products—like luggage, home goods, clothing, and beauty products—this can negatively affect sales.

Each new store gives consumers a chance to experience the products before opening their wallets while also giving brands the chance to educate consumers on their products and collect valuable feedback from customers. Retail staff can be trained more effectively on each product, spending more time with each customer to provide better service.

With fulfillment still being carried out mostly online, stores don’t need to house inventory in their limited space, letting them dedicate more room to education and experience. And when customers are standing right in front of sales associates, those associates can start direct conversations that are impossible with eCommerce, gathering information about purchasing decisions that can then be fed back into the online stores.

Each new brick-and-mortar store helps create a more authentic connection with customers—the same reason that UGC is proving so much more effective than influencer content for traditional retailers.

Retail is changing fast, with power shifting from brands to consumers. People don’t like being told what to think—or, likewise, what to buy. Brands can no longer get away with relying on influencers or their own content to create sales; consumers crave a deeper, more meaningful connection that goes beyond celebrity recommendations.

And even though they seem diametrically opposed, user-generated content and brick-and-mortar expansion are both strong ways to build those crucial, evolved brand-customer relationships.

With UGC, brands see their customers become ambassadors and give real people’s voices to their marketing. Sure, the UGC may not hit every marketing talking point perfectly and the brands don’t have total control of the message—but that’s the point. It’s more raw and authentic, so it resonates far more with today’s more savvy customers.

With the move to physical locations, brands can have three-dimensional, five-senses engagement with their customers. That level of interaction puts human faces on a business that’s otherwise just something people consume on a screen.

So while brands like Sephora and Glossier might look like they’re moving in entirely different directions, both approaches are an attempt to solve the same problem: adapting to more-empowered consumers. Buyers have access to more information and reviews than ever to make their own decisions.