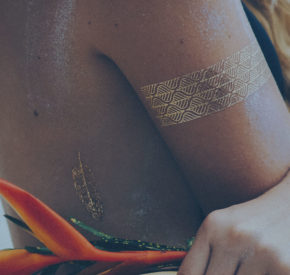 A little over a year after starting metallic, temporary tattoo company TribeTats, founder and CEO Degelis Tufts was thrilled with how the company was growing. She had a steady stream of customers coming in from Amazon and on her site, had been able to score pop ups with the likes of Rebecca Minkoff and TOMS shoes, and TribeTats were getting popular at music festivals and other events. So when Tufts started getting some inbound inquiries from brands asking for custom tattoos, she nearly brushed it off. Why bother with an entirely new B2B line of business when the direct-to-consumer approach was working so well?

Then she paused and really thought about it. Would skipping B2B potentially be a missed opportunity for big growth? If she did it right, could it actually support her B2C operation? If people were already asking for it, was it worth at least testing out?

The answer to all of those questions was a strong enough ‘maybe’ that Tufts decided to look for some scrappy ways to give it a try. Fast forward 18 months later, and TribeTats’ B2B business now brings in more revenue than the original B2C line. Here are some lessons Tufts learned that could benefit any direct-to-consumer company wondering if B2B might be good for them.

Starting out, Tufts approached the B2B side of things as an experiment—but one that was driven by listening to what the market wanted. Because she had started getting cold outreach from big brands looking to design custom tattoos for events and promotions, she went into it reasonably sure that it wouldn’t be a total waste of time. “Intuitively, if I wanted to make my own custom tattoos, I could assume other people would want to also and they just don’t know how,” says Tufts.

Just because people want something doesn’t mean it’s the right move for your business. Customers want a lot of things and going after all of them could prevent you from succeeding at any of them.

Of course, just because people want it doesn’t mean it’s the right move for your business. Customers want a lot of things and going after all of them could prevent you from succeeding at any of them. But Tufts was getting enough cold, inbound interest in this type of service that it seemed like something she could try without spreading herself too thin. It wasn’t too far from her core product, she had customers knocking on her door, and she felt it could really help her business scale. “The thing about B2B that I quickly saw the beauty in, is that if you have a conversion, it might be thousands of dollars in an order versus a $20 dollar check out for our regular B2C eCommerce,” says Tufts. “It’s not to say that the direct-to-consumer business isn’t highly attractive, I just thought that having B2B would allow me to scale [to profitability] faster than I would have otherwise.”

Plus, she saw an opportunity for the B2B side of things to help boost TribeTats’ B2C business by promoting brand awareness in an extraordinarily cost-effective way. “I realized, for example, if we had a booth at a music festival, it was very expensive. But there were these other big brands sponsoring music festivals, and I could have my product in their booth—just co-branded—and they would actually pay me for it,” says Tufts. After having spent so much of her marketing budget on “exposure” over the years, she saw this as a win-win to help these brands provide cool swag for their own marketing, get her product in the hands (or on the arms) of more users who might then buy directly later—all while getting paid for the work she was doing.

So, Tufts came up with a basic plan for how B2B custom orders could work, contacted the brands who had originally reached out to her, emailed her B2C customers about this new offering in case any of them worked for companies that might be interested, and started exploring other channels for finding more clients.

Finding a new slew of customers

From the get-go, Tufts knew she wanted to market and grow this side of the business herself. “The thing I found when starting out with paid channels is, they might have been profitable, but after you pay an agency thousands of dollars a month to manage it for you, it’s not profitable,” she says. As a bootstrapped entrepreneur, she was no stranger to getting her hands dirty to save her margins.

Tufts pretty immediately turned to AdWords, which she felt had strong potential because it allowed her to connect with a warm audience who was actively searching for the products she was offering. She launched a few test campaigns and found that, although search volumes for terms like “custom temporary tattoos” were relatively low, the people who were searching for that were highly relevant and likely to convert. Though she didn’t have experience with AdWords, with a little bit of spend to run experiments and a lot of calls to Google Customer Support for advice on how to make her campaigns better (a service she thinks most entrepreneurs don’t realize is provided), she was able to build some successful ads that drove growth for the B2B side of the business.

She also experimented with some ads on Facebook targeting people in marketing fields and quickly found it didn’t move the needle for her business. It’s hard to know exactly why, but her guess is that Facebook ads just caught marketers at the wrong time. They target the right people, but lack intent. “Someone might see it and think, oh, well that could be cool but we’re not planning an event for a few months.”

Tufts really sees AdWords as a litmus test for whether this a new line of business will work. “I usually tell people, if it doesn’t work with AdWords, it’s probably not going to work on other channels,” she says. “If you can’t get someone to convert when they’re actively looking for what you have and you put it at the top, it’s going to be even harder with a cold audience.”

Of course, launching a new line of business isn’t just about finding customers—you have to deliver, too. Tufts says that there were some things about her operations that definitely had to change when working with B2B customers. “It’s a much different sales and nurturing process.”

For example, when Tufts tried to treat her B2B checkout process like her B2C one, encouraging customers for major orders to just upload their image, select a quantity, and click “buy,” nobody actually ordered. It turns out B2B customers wanted to talk to someone first. When spending so much money, they needed help coming up with ideas for cool tattoos, assurance that their designs would look good on the final product, and generally required more hand-holding. Tufts updated her process and hired an account manager to help clients feel more comfortable making large purchases.

If it doesn’t work with AdWords, it’s probably not going to work on other channels.

When considering doing B2B, Tufts says it’s important to really think through what it will require operationally, both so you can make sure you can serve your customers, but also so you can determine what type of work doesn’t make sense for the business. At one point Tufts considered extending her B2B offerings to wedding planners, but found that would take the same amount of work up front for much smaller orders. “You also have to decide what you don’t want to do,” she explains. “There might be an a big market for [wedding tattoos] but I felt like it would be too much of a burden on the team.”

B2B has become so successful for TribeTats that Tufts now devotes most of her time, energy, and budget to that side of the business. And all it took to start was listening to customer demand and putting in a little work to figure out how to reach her target customer.

While every company is different and her success certainly doesn’t guarantee that it will work for you, it raises the question: Are you missing out on a major opportunity by ignoring B2B?