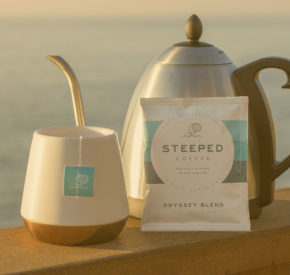 Toward the end of December last year I backed a product on Kickstarter that claimed to marry the convenience of single cup coffee pods with the taste of specialty pour over coffee, but without the wasteful pods or expensive and time consuming equipment. As a coffee lover, I went from landing on the crowdfunding page to, “Take my money!” in about five seconds.

Steeped Coffee is one of those, “why didn’t I think of that?” inventions. The product is, at its most basic level, coffee in a tea bag. It works surprisingly well (I now supplement my French press habit a few times week with a bag of Steeped’s light roast) and once you try it, you’ll wonder why no one tried it before. The reason, says founder Josh Wilbur, is that the process of getting coffee into a steepable bag and staying fresh long enough to ship and brew is a lot more complicated than you think.

This is the story of how Wilbur built Steeped Coffee and the reason he decided to launch on Kickstarter (hint: it wasn’t because his fledgling company needed the $36,000 they raised).

The origin of Steeped Coffee starts with a trip to Wilbur’s in-laws for Thanksgiving about seven years ago.

“I just wanted a good coffee at my in-laws’ and had no options so I was like, “It shouldn’t be that difficult,’” says Wilbur. So he found some filter bags, ground up some coffee, MacGyvered them together, and brought some homemade coffee packs with him on the holiday. Unfortunately, the Steeped Coffee MVP wasn’t much of a success—it worked, but it didn’t taste as good as traditionally brewed coffee and it wouldn’t keep very long (grinding fresh for each tea bag wasn’t very practical). Wilbur still didn’t have any good options for coffee at his in-laws’. His experiment demonstrated that his concept was possible, but needed a lot of work to not just be “coffee in a tea bag.” So Wilbur set it aside.

“[Kickstarter was] a vehicle to tell the public about what we’d already been doing.”

He poured his focus into the fintech startup he was working for and didn’t think much about Steeped Coffee for few years. The idea lay untouched in the back of his mind until, after leaving that startup in 2014, Wilbur took a family trip to Florida to decompress before starting his next gig. On the flight there, he filled up a journal with all the Steeped Coffee ideas that had been ruminating for years. By the time he landed he had a business plan, go-to-market strategy, branding concept, and company vision. “At that point I knew I was going to do Steeped Coffee, I just didn’t know when,” he says.

As luck would have it, his next job, working on a wildly successful Kickstarter project called Bibliotheca, would give him the confidence and skills to finally make a go of Steeped Coffee.

Bibliotheca, a design bible publishing project, raised $1.4 million against a $37,000 goal from nearly 15,000 backers. Wilbur was behind sourcing materials, production, operations, and setting up logistics for five global distribution centers. The project’s runaway success, and the experience of helping a physical product go from inception to delivery, gave Wilbur the confidence to dust off his long-dormant idea. “I started [Steeped Coffee] just like any idea,” he says, “plant the seed, start telling people about it, time in the some water, give it some sun, and just see if it grows, sort of thing. Basically giving it some time on nights and weekends.”

Before Wilbur could put his Bibliotheca-honed Kickstarter know-how to use for Steeped Coffee, he had to iron out all the kinks with the product. His first try years earlier at his in-laws hadn’t produced great results. Still, he was confident that the idea had merit, it just needed a lot of development and innovation.

He spent over a year perfecting the product, tweaking details like the nitrogen sealed compostable filter bag, experimenting with coffee grind sizes, finding outer packaging that would keep the coffee inside fresh for months (still compostable!), securing intellectual property around the technology and process, and lining up coffee suppliers, printers, and warehousing. That’s Steeped Coffee’s not-so-dirty little secret: they spent more than a year on the product before launching the Kickstarter campaign. That’s in contrast to many Kickstarter products that launch with nothing more than an idea, and suffer long delays or fail to deliver at all. A 2015 internal study at Kickstarter found that 9% of funded projects fail to fulfill rewards, and the food category is among the top offenders. CNN found in 2012 that 84% of projects end up delayed.

“Before we launched Kickstarter, we already had our equipment set up—machines ordered, paid for, put in our facility,” says Wilbur. “All of our innovation was in place. We were actually printing product already. We had our FDA certifications. All of that stuff. Hired out staff and we were just starting to be able to fulfill commercial orders.”

Initially, while still working on the Bibliotheca project, Wilbur treated building Steeped Coffee as a hobby. He went to trade shows in Las Vegas and Chicago, and took an overseas trip to Asia. “I was building relationships, putting pieces together, finding materials, building early versions, testing, submitting patents and trademarks, and building a pitch deck. That kind of thing happens in a handful of late night sessions where I should be sleeping or replaces the time I should be surfing,” he says. “Sometimes you have to trade one passion for another.”

Once Bibliotheca wrapped, he quickly put all his time into taking Steeped Coffee to the next level. Front loading all the business development work to get the product to a point where it was ready to ship allowed Steeped Coffee to fulfill rewards as soon as the crowdfunding campaign was over.

Bootstrapping meant Wilbur took on a lot of personal risk to see his vision through. And lack of capital required constant acrobatics to get so far along before launching the Kickstarter campaign. Leveraging literally everything he had, and a few early commercial orders, helped fund that early development for the company. “[It was] a huge challenge,” says Wilbur of bootstrapping that first year, “but it helped us get really lean, stay agile, and get Steeped going.”

While the $36,000 that came in from Kickstarter certainly helped—bootstrapping meant money was tight; Wilbur tells how his COO sometimes borrowed his car to drive for Uber on weekends and evenings to stretch their runway—it wasn’t the main reason they turned to Kickstarter. Wilbur’s true goal for the campaign was to launch his new product to the world.

“Crowdfunding was always in the marketing plan,” says Wilbur. He never intended for it to really fund the business in a meaningful way—and in fact, he was working in parallel while running the Kickstarter campaign to line up larger commercial orders and pursuing other sources of funding. The crowdfunding campaign was about announcing that Steeped Coffee had arrived.

“[Kickstarter was] a vehicle to tell the public about what we’d already been doing,” says Wilbur. “We developed this Steeped brand to be the best version of what we had created. To give this new Steeped brewing method and technology a face, and to carve out space to be able to invite other licensed partners into.”

Crowdfunding offered a way to create that space. Kickstarter exposed Steeped Coffee to a larger initial audience than they may have been able to reach on their own, and the process of running the campaign forced them to get their business business house in order. “I just wanted us to at least break even and go through the process, which produces all kind of other benefits like starting community, connecting with brand advocates, establishing brand presence, creating marketing assets, defining and telling our story, and of course, letting our friends and family know that this thing we’ve been working on is actually real,” says Wilbur.

That last part was important to Wilbur, who had built a strong network of coffee lovers in Santa Cruz, California, where he lives. “We have a tight-knit coffee network or coffee community here in Santa Cruz,” says Wilbur. “It would be easy to take for granted the saturation of coffee knowledge birthed from this area. Understanding specialty coffee is a byproduct of living here and we are just an extension of everything that has come before us.”

Wilbur had found his tribe—the group of local, third wave coffee aficionados—and he leaned on them to promote the campaign and seed that community he hoped to build.

The focus on marketing and brand building over revenue probably cost Steeped Coffee a chance at a larger return from Kickstarter.

“I’d say we totally failed in doing what we should have done with the standard means of marketing,” says Wilbur, who estimates they could have probably brought in $100,000-$200,000 rather than the $36,000 they ended up raising.

The most egregious mistake? Wilbur and company didn’t send one marketing email during their entire campaign. Crowdfunding platform Indiegogo names email as the “most effective tool for driving early momentum” in crowdfunding campaigns. Wilbur, on the other hand, relied on that peer network and friends to spread the campaign through social media.

Despite the ill-advised approach, Steeped Coffee raised half their goal in just three days. The initial push on social media made it clear that, when reached, people were excited about the idea and a bit of press on specialty coffee sites and podcasts helped spread the word to the right backers. Wilbur concedes that if they’d had more bandwidth, he probably should have continued the push beyond their immediate networks (i.e., sending a few emails probably would have been a wise idea).

Since Steeped Coffee didn’t need the money to get the product into production (they were already in production), they could afford to make those mistakes. “We just wanted a foundation, a base of people coming in, to know about what we’re doing, to launch it out there, to talk about it in public finally,” says Wilbur. Indeed, the Kickstarter led to some national press, industry notoriety, and increased exposure. Those are things that likely would have happened even if they had ultimately failed to meet their funding goal.

Even so, Wilbur’s number one piece of advice to others running crowdfunding campaigns isn’t to build an email list. It’s to find your tribe.

“For me, the best thing was having an awesome wife and friends,” says Wilbur. “I had a few very close people who went all out to spread the word as if they were leading the team. Then my closest community who were total advocates, and my extended circles who all made that whole thing so fun and exciting.”

Steeped Coffee’s use of Kickstarter is interesting because it emphasizes the “crowd” part of crowdfunding more than the “funding.” The money was certainly welcome for the scrappy upstart, but the real magic was in kickstarting a community around the product and telling the world about their new way of doing things. The big opportunity ahead of Steeped Coffee might not even be in the direct-to-consumer model—it’s more likely in their licensed partners program for specialty roasters and wholesale through B2B deals with hotel chains and other distributors. But crowdfunding created space for their product to exist, it expanded the Steeped Coffee tribe, and that helps them fill in all the commercial stuff as a result.

As Wilbur says: “It’s really all about relationships with people—the ones you know and the ones you don’t know yet.”