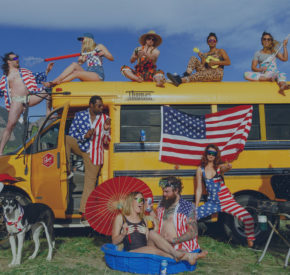 Last year, MTV placed an order for a reality show that would follow two college buddies who had started an online clothing company and grown it to $5 million/year in sales. On its surface, that hardly sounds like the makings of hit reality television. The day-to-day machinations of running an eCommerce company aren’t really must-see TV. But then again, most companies are not Shinesty.

The company, founded by college friends Chris White and Jens Nicolaysen in Boulder, Colorado, is a chaotic, goofy brand that sells clothes meant to elicit reactions ranging from shock and awe to hearty laughter. One of their best selling products is a pair of men’s underwear with animals ranging from a wolf to an eagle sewn into the middle crotch panel.

Shinesty’s website explains the MTV series this way: “This six-episode ‘docu-comedy’ is not appropriate for all ages and features casual nudity, kidnappings, bikini waxes, irreverent clothing, countless weiner shaped food jokes, and a variety of other very strange incidents that actually do happen in our office every week.”

Traditional entrepreneurs might cringe reading that. How can a legitimate business merely exist, let alone succeed, in a madhouse environment like that?

But as Nicolaysen says in the MTV show trailer, there is a method to the madness. There are some universal truths about a brand that cleared eight figures in revenue last year that can apply to any company.

Speak to your customers in their language

One of the most important lessons to take from Shinesty’s rise is that brands should be memorable, and entertain; they shouldn’t only sell.

“People think we’re ridiculous, because we are ridiculous,” White, Shinesty’s CEO, told me, in a very matter-of-fact tone.

White and Nicolaysen began the company by selling vintage clothing from thrift stores in Colorado. After they had some success, they began their own clothing line to sell the types of clothes they liked wearing. As White says in the MTV trailer, “[We] realized… there’s a big market out there for guys who want to wear crazy suits, or ding-a-ling slings, or peach pit papusas.” (Yes, that’s an actual quote.)

They designed their clothes using gut and intuition, and from the start embraced stunt marketing and meme-culture-friendly content.

White and Nicolaysen have made sure to be very true to a certain kind of lifestyle. Shinesty’s mission statement, enumerated on the company’s website, is, “To bring you the most outlandish collection of clothing the world has ever seen.”

If the marketing and branding of the company feels like marketing and branding, White says they are probably doing it wrong. So the company’s Instagram feed deftly uses recent pop culture moments and hyperbole, as well as a tone of self-deprecation to keep everything light-hearted. It also asks fans of the brand to get in on the act, by sending pictures of themselves, with friends and/or family showing off the outlandish clothing.

But the lesson here is universal whether you’re selling Fresh Prince adult onesies (yes, that’s a real thing) or something more staid, like coffee or computer accessories: you need to speak your customer’s language. You need to be part of their tribe.

White and his partner realized early on, though, that gut and intuition do not a business plan make, so they decided to focus on what the numbers could tell them about what their customers really wanted. A major part of their plan was an internal crowdsourcing site called Mad Labs, an online product design incubator where customers can participate in the R&D process for new product lines by submitting ideas and voting on new products in development.

Mad Labs gives Shinesty a way to gauge what their core clientele wants before the most important buying seasons of the year. The analytics begin six months out on some products. Beyond the voting and comments logged via Mad Lab, Shinesty also gathers data from email marketing, surveys, and pre-order sales, which together gives the company a snapshot of potential inventory.

You need to speak your customer’s language. You need to be part of their tribe.

That’s important, because Shinesty’s business, like many retail businesses, is tremendously seasonal. Christmas, Halloween, football season, Thanksgiving, and ski season all happen to occur in a three to four month period that account for roughly 60 percent of Shinesty’s business. Because these seasons account for such a large portion of sales, it’s important to understand customers wants well before the season starts.

Since more than half their business happens over the three to four months of the NFL/holiday run in the fall, Shinesty must use analytics to make sure they’re maximizing the available sales opportunities. Under producing (or perhaps worse, overproducing) inventory during these key sales months could be disastrous for the company. That’s where the benefit of things like Mad Labs, which measures demand before committing to a product order, and their other analytics measurements come into play.

Apparel is a dog-eat-dog business and competition is fierce. White says Shinesty regularly comes out with a design, and by the next year some department stores have nearly identical items on their shelves.

In spite of, or perhaps because the competition is consistently lifting ideas from Shinesty, the company is constantly working to create new products. Apparel brands spend a great deal of their time and resources protecting their intellectual property, and while that makes sense, White believes for his company it is more important to be setting the trends and creating new designs every few weeks.

Inventory obsolescence is a big deal for Shinesty. By selling products that in some cases have the miniscule shelf life of an internet meme, the company must be the first to market with their clothing. When people come looking for a very specific kitschy holiday sweater that plays on the latest web joke spawned on Reddit, Shinesty wants to be where folks land first.

To make that happen, Shinesty gets ideas out to designers fast, and then lets a sort of Darwinian evolutionary process take over. Designers experiment with an idea, creating many iterations of a product. Many designs are scrapped during this part of the process, but a handful are chosen to be tested on the site by hundreds of customers who have previously purchased from Shinesty. Customers are asked to leave feedback about new product ideas and a handful of those end up on Mad Labs, where they are voted on. Only a small number actually make it for sale on Shinesty.

A company’s voice and marketing is what brings loyalty, interest, and drives word of mouth. Shinesty understands this deeply, and everything they do, from marketing to product design, is done in a strategic way to serve their core customer. It may seem chaotic from the outside looking in, but Shinesty understands their fans and they speak their language with fluency.

Meme culture, which has powered so much of the company’s success, happens everywhere, and Shinesty hopes to take the company international. (Currently about 20 percent of the the site’s sales are non-U.S.) White would like to eventually recruit people in other countries who have a deep understanding of trends happening in their part of the world. For now though he wants to entertain, and create products that allow customers to be outlandish.

That is, after all, Shinesty’s mission.