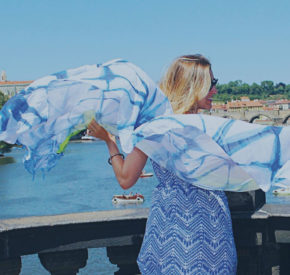 But, especially for eCommerce companies, Pinterest might be the most powerful social tool available to you. That’s because people on Pinterest are ready to buy: among other eye-catching stats, according to Pinterest, 93 percent of Pinners use the platform to plan purchases, 40 percent have a household income of over $100K, and 63 percent of millennials say Pinterest helps them discover new brands or products to buy. And no, it’s not just women.

And yet, so many business owners don’t have a true strategy behind their Pinterest account, just throwing new products up on their boards whenever they have them, or pinning on occasion whenever they remember. That’s how it was for Kirsten La Greca, founder of customizable apparel and gift site Rosa Gold, until she realized she was wasting Pinterest’s potential. It was already her biggest driver of traffic and she was doing basically nothing; what might be the result of even a small investment in strategy?

On a vacation earlier this year, instead of picking up a novel, La Greca dove into articles about Pinterest’s algorithm and best practices. She came back with a simple strategy that took her a couple days to implement and then about an hour each week to maintain—and it grew her traffic from that channel by over 300 percent.

Here’s what she did—and what any business can do—to work with Pinterest’s algorithm and see serious success for your business.

According to La Greca, the base of her strategy came from a fundamental shift in how she thought about Pinterest. “A lot of people think Pinterest is a social network,” she says. “And yes you can follow people and people can follow you, but Pinterest really is a search engine—it’s a visual search engine.”

This realization struck her, because it’s exactly how she uses Pinterest as a consumer, too. “I’m like, I have an avocado and a beet. What can I make with that? So I search recipes or other specific stuff. I very rarely scroll through it like I would on Instagram or something where you’re just kind of browsing.”

So before doing anything else, La Greca took off her community growth hat and put on her SEO hat. Instead of focusing on growing her follower count, like she had been doing, she shifted her focus to making sure her pins were findable.

To start, this meant figuring out what her target customers were likely searching for. Luckily, like Google, Pinterest search gives you autocomplete suggestions based off popular searches. She searched high-level for her business, and dug further into terms related to monogramming and personalization.

She took the Pinterest search information she gathered, and compared it to the motivations she knew people had for buying her products to see where they might align. For instance, she knew her customizable accessories are popular for bridesmaids. Looking at the search suggestions, La Greca knew her products didn’t really relate to bridesmaid dresses or hair, but that she absolutely should be hitting on the search terms for bridesmaid gifts or even bridesmaid proposal.

La Greca also knew that a lot of people bought her monogrammed blanket scarves in the fall, so did some digging to see where she could fit in there. Fall outfits seemed like an obvious choice to target.

La Greca went through and did this for all her products, from all angles, thinking of as many reasons as she could that customers chose to buy. Armed with this knowledge, she started to refigure her Pinterest profile, boards, and pins for more search success.

Set up your baseline

To start, La Greca got to work on Rosa Gold’s profile. Instead of just her business name and a fun description written in her usual marketing voice, La Greca changed both to be packed with keywords related to her business. While it wasn’t her favorite look, she knew it was important given that both of these fields are searchable as well.

Next, she turned her attention to her boards, making sure she had boards for the target keywords she had identified and that both the title and description for those included lots of variations on those keywords. She also did some work to make sure each board looked nice and was full of relevant pins, so that when someone did find her content through search, they stuck around and browsed.

Finally, La Greca turned to optimizing her pins themselves. An especially important step was setting up rich pins so that Pinterest automatically pulls in product information like price, item name, and description from her website—making her pins extra searchable and creating a sales opportunity directly from each pin.

Eye-catching imagery was also obviously important, and she worked to create multiple pins for each of her products, using different techniques like stylized overhead shots and more on-the-street shots to create variety. For inspiration here, La Greca recommends looking at what competitors are doing, and even creating a secret board to save ideas from competitors and others that you can use to inspire your own pins.

Now that all her content was set up to be extra searchable, La Greca just had to keep her Pinterest active to make sure the algorithm would keep serving her content high in results. “Pinterest really rewards consistent activity,” explains La Greca. “But who the hell has the time to be on Pinterest every single day?”

For Pinterest inspiration, create a secret board and pin things to it from your competitors. You can refer to it later when you’re trying to come up with ideas about what to pin.

She used a scheduling tool to make it easier to keep her page active without taking up half her time. La Greca spends just about an hour each week to batch schedule regular pins to go out throughout the week. (The tool she used has since shut down, but Tailwind offers a similar solution.)

Finally, even though she was more focused on SEO than followers, La Greca still wanted find new fans through Pinterest. She used group boards, which allow your pins to get in front of the followers of all the members of the board, to try to reach new followers within her niche. Business owners can find relevant group boards with the help of Pingroupie, and then follow the instructions in the description or reach out to the board owner (the first member listed) in order to join. Once you start putting your pins on these boards, your reach immediately amplifies.

“The amount of repins I get from stuff I pin on group boards is pretty spectacular,” La Greca says.

And that’s it: SEO-optimize everything and then work strategically to make sure your pins reach the widest audience possible.

La Greca knows her strategy isn’t perfect. In fact, a month or so ago the tool she was using to automate her pinning shut down, and she hasn’t had a chance to move to another tool, meaning her Pinterest has been a bit neglected lately. Even so, thanks to the foundation she set up with this simple strategy, her Pinterest traffic is up 362 percent from this time last year, making the site her number one source of traffic and a serious boon to her business.

“You can always grow from here, but just by having the basic foundation, you’re already way ahead of the game,” La Greca says.