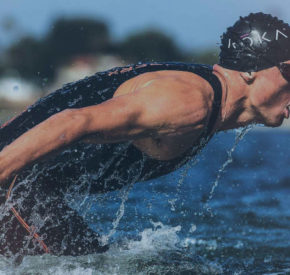 Race after race Olympian Gwen Jorgensen would step out of the water during the swimming portions of her triathlons shivering. The swimsuits available to her either provided little protection from the elements or they were so bulky it made it harder to compete at a high level. She went to her sponsor, Roka, a sports performance apparel company, with her concerns. They worked with her to design a better swimsuit.

“With Gwen, she obviously did not have much body fat and was racing in some pretty extreme cold conditions,” said Mark Stephens, Roka’s VP of Product Development in an email. “We worked with her to modify the cut of our suit to add sleeves and extend down to the knees. We even had one prototype where we had separate removable sleeves to isolate the arm movement, and give her the flexibility to take the arms off if she started to overheat.”

When Jorgensen, a world class triathlete who won gold at the Rio Olympics in 2016, asked Roka to build a warmer wetsuit, they did. That’s par for the course for Roka, who utilizes the athletes they sponsor for more than marketing.

These athletes, who represent the aspirations of their core customers, are central to what the company says is its philosophy on product development: ask questions of the best in the business, listen to their answers, and create products based on their needs.

For Roka, the influential athletes they work with provide, above all else, research and development.

“We aren’t trying to push technology on people, but rather build new technology about what people may need to improve their performance,” said Stephens, who thinks it’s essential for the company to consistently ask the question, “If we were to start from scratch how would we build it.”

It’s not surprising that Roka puts such a premium on the needs of athletes in its design process given how the company got started. The brand was founded by former Stanford University swimmers Rob Canales and Kurt Spenser, who found themselves frustrated with existing swim gear after participating in a half-Ironman event in Canales’s hometown of Austin, Texas on a dare in 2010.

A few hundred meters into the swim portion of the event, Canales and Spenser found themselves gassed—not what pair of former NCAA division one competitive swimmers had expected to happen. At issue was their swimsuits, which the pair found had unacceptable tradeoffs that hurt their performance.

“As former competitive swimmers, we had high expectations when we paid several hundred dollars for fancy wetsuits for the race, but were frustrated by what we felt were design compromises that slowed us down and made us uncomfortable,” Canales told Inc. magazine.

The two competed at a few more competitions with available equipment, until, after woefully underperforming at one major event, they started thinking seriously about how they could design their own wetsuit.

They retreated to Canales’ garage and set to work designing their first product, the Maverick Pro, a new kind of swimsuit that they were sure would improve performance without any of the compromises that exiting options had.

From the start, they leaned on other world-class athletes to test their designs and participate in the prototyping process. They hooked up with Jesse Thomas, another standout Stanford athlete and emerging force on the triathlon scene to test out the Maverick Pro. Thomas, who has a mechanical engineering background, was keen to try out new technologies that might give him a competitive edge, especially in the swimming portion of the race, given that was his newest sport.

In his first race wearing the Maverick Pro, Thomas led the pack in the water, and ended up winning his first professional IRONMAN 70.3 race.

“It’s one thing to make a product that you love, and that makes a difference for you. It’s a whole other level of excitement and fulfillment when you see that product make a real difference for someone else trying to conquer an epic challenge,” Spenser told Swim Swam. From that point, Roka made world-class athletes the center of their design process.

The company got into sunglasses because Thomas, its first endorsed athlete, favored aviator-style glasses over the more sci-fi-like styles that dominate the performance eyewear market, simply because they look better. Rather famously, he had one of his first big triathlon wins sporting a pair of gas station aviators, sacrificing performance for fashion (and still succeeding).

“Jesse helped us understand that even pro athletes value style and aesthetics in performance eyewear,” said Canales to Inc. The company now employs a team of eyewear designers in its Irvine, California R&D lab.

Yet, even with a lab full of eggheads, Roka still puts athletes front and center in the research and design process.

The company’s newest GP-1 glasses came into existence to address one very particular issue athletes were struggling with: they were getting wacked in the face with mud, dust, and other elements from fellow runners and bikers. So the new frames dispatched with an upper rim and added a beefier lower element to help protect runners from mud and other detritus flying up into their faces.

Stephens said of the GP-1s, “It was born out of direct work with the best world tour cyclists to solve the problems they face in extreme race conditions.”

The brand took off because their swimsuits worked, and worked well. They shaved time off of elite athletes’ performances. But it is the endorsement capital that top athletes provide just as much as the product’s efficacy that helped the brand spread. It’s hard not to notice the top finishers at a triathlon event coming out of the water all wearing the same swimsuit.

By aligning the brand with the best athletes in their sports, Roka becomes more visible. A pre-summer look at, “The Swimsuits the Pros Wear” by Outside magazine, for example, turned up one of Roka’s one-piece suits because it is worn professionally by triathlete Meredith Kessler.

The celebrity of those athletes, which is tied to their elite performance, becomes brand equity for Roka.

Roka has raised $43.4 million in venture capital financing to build the next great performance apparel brand. If they reach that billion-dollar potential and become a household name like Nike or Under Armour, it will be because of their commitment to serving the athletes who are at the core of both their R&D and marketing strategies.