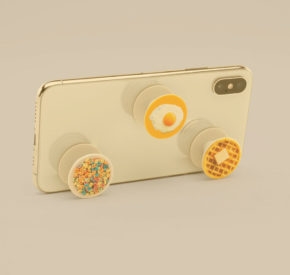 What’s that thing on the back of your phone?”

That’s the eternal question anyone with a PopSocket has probably heard more times than they can count. But the answer is, it’s a simple “life hack” that has earned close to $170 million in revenue.

Created by Boulder, Colorado-based philosophy teacher David Barnett to solve the problem of tangled headphones, the simple product has exploded over the past eight years. It is now one of the best selling phone peripherals on the market.

PopSockets is currently moving tens of millions of products each year, with a unit price of just $10. A few key factors that contributed to the incredible growth of Barnett’s company.

By capitalizing on this niche market, using technology that streamlined early prototyping, and adapting their product customers’ needs through personalization, PopSockets has grown from a personal life hack to a $169 million dollar company in under a decade.

Fill your network with high-leverage people

In 2014, Barnett attended a trade show for the promotional-products industry—while not his first distribution strategy, it gave PopSockets a huge boost in potential clients, suppliers, and distributors. The buyers from this conference included several big-name companies that helped put PopSockets in front of a much wider audience.

“It was a huge hit,” Barnett told 303 Magazine. “I had crowds around my booth. I had no idea what I was doing. I didn’t understand the terminology for pricing or anything, but I left with a bunch of contacts and a lot of excited buyers and had decent sized orders.”

When the customers from this show started distributing PopSockets to their networks, it put the product in front of a group of people that understood its value. Companies like Snapchat and Twitter branded their PopSockets and handed them out as conference swag or gave them to top users or employees—which triggered other companies to do the same.

The increasing awareness of PopSockets for their promotional value filtered down to the general public as well. When Barnett initially launched PopSockets, no one was buying because they didn’t really understand the value proposition. By selling PopSockets as a B2B promotional product, Barnett found a way to get his products into the hands of potential B2C buyers, as well.

As he told 303 Magazine: “Those orders ended up getting PopSockets in people’s hand and they get asked every day — ‘What is that?’ The second question is, ‘Where do I get it?’”

In other words, he’d identified the right growth channel that allowed him to acquire customers and gain traction for PopSockets.

Soon, those potential customers began to search for the product.

By 2016, the interest in “popsockets” as a search term was climbing steadily. It broke out of the promotional-products and conference niche and into the general public’s eye.

Without popular companies like Twitter buying into the value of PopSockets as a promotional tool, the company would not have experienced this same kind of growth. Being a useful tool for these larger companies meant association with them by proxy. Barnett put his product in the hands of companies that already had considerable distribution networks, and PopSockets leveraged that association to kick-start broader consumer interest in their product.

Make many MVPs—not just one

Taking a product from idea all the way to store shelves can be an arduous process. Barnett’s original MVP (minimum viable product) version of the PopSocket was a pair of buttons glued to the back of his phone. That obviously wouldn’t cut it as a salable product, so he had to turn it into something that was functional, durable, and repeatable. Without any outside funding, this meant prototyping cheaply, on a small scale, and moving quickly. He used 3D drafting and printing to make sure the process could move quickly and fail faster so he could learn more as a result.

In the early days of PopSockets, Barnett went through 60 rounds of prototypes. Learning and then using a program called SolidWorks, he made 3D CAD models to send to a manufacturing partner in China who could get a prototype back to him within two weeks.

“My very first prototype, I still have it, it was a flat piece of plastic,” Barnett recounted in a Mixergy interview. “And when you press on it, it was supposed to expand like an accordion, like a bowl. When you actually pressed on this, nothing happened. It was like pushing on a silver dollar. It was just rock hard. I mean, it didn’t expand the slightest. It needed to expand about an inch and a half, and it was zero. So I knew, it was pretty clear that it wasn’t anywhere close to working.”

By prototyping quickly, Barnett was able to learn from these failures and move on. Learning from each iteration, Barnett was able to test small-scale changes that helped PopSockets evolve faster. Instead of wasting time manufacturing one test at a time, he would draft and model hundreds of options (each round of manufacturing tests would include 10 or more different designs).

The product has matured quite a bit since then. Still the size of a silver dollar, it features a fully expanding soft plastic stand that actually pops when you pull on it. It also comes with an interchangeable top that is available in a number of different textures and materials.

Barnett also utilized the relatively new (at the time) crowdfunding platform Kickstarter to help validate his idea and source capital for further tests. Raising $18,591 against a goal of $12,000, PopSockets started manufacturing on their first-ever phone case. While the design has changed since 2012, it gave the company a way to gain traction with potential customers and confirmed that people would actually pay money for the product.

By leveraging new technologies for designing, modeling, and funding his project, Barnett was able to move through a staggering amount of different prototypes in only two years. This not only gave Barnett a way to find flaws and make simple changes quickly, but also helped him understand the entirety of the production process—lessons that would help him shape the scope of the product and the company in the future.

When Barnett attended his first promotional-product trade show, the attendees immediately recognized something that he didn’t—personalization made PopSockets even more valuable. Giving customers the ability to customize the product to their aesthetic would make it more appealing to a wider audience.

Personalization gives customers a way to make the product their own, which gives it more perceived value. At a time when smartphone personalization and customization are the norm, personalization was actually table stakes for PopSockets.

It also helped the company expand their product offering considerably. PopSockets could offer a baseline of designs for customers to choose from as well as an ever-expanding range of possibilities for personalization. They could also create designs for any holiday or special occasion and offer exclusive limited runs.

Further, personalization allows PopSockets to keep doing what they’d done so effectively by working with companies to create branded promotional products: associate their brand with other successful brands. By licensing intellection property from pop-culture brands like Disney, Sanrio, Swarovski, and the major North American sports leagues, PopSockets is able to tap into those audiences.

Personalization is becoming more and more important in today’s eCommerce market—this is very true for smartphone accessories. With myriad available baubles and doodads a person can attach to their phone, PopSockets’ level of personalization helps keep them competitive.

PopSockets started out as a way for founder David Barnett to keep his headphones from getting tangled. It has grown into an eCommerce company that is currently doing $169 million in revenue. They achieved that growth by finding their niche, leveraging modern technology to perfect their offering, and giving customers a way to make the product their own.

► Get buy-in from the right market

PopSockets didn’t plan to go after promotion-product trade shows at the start, but the audience there immediately saw the value from a company branding perspective. This is where PopSockets got a foothold that propelled its growth.

If PopSockets had stayed in the purely promotion-product space, they wouldn’t be as wildly successful as they are today. You need to find a way to expand your audience and showcase value to different types of customers.

► Use technology to move faster

If Barnett had gone to Kickstarter with his original design, it would have failed. He was able to learn more and iterate on his prototypes with the use of modern technology. Find ways to fail faster and you’ll be able to make a better product in the long run.

► Give customers a way to make it their own

Personalization gives customers a way to tailor their PopSockets to their specific tastes and interests. If the company didn’t allow for this kind of customization, they would not be able to appeal to as broad an audience as they do. Customers expect to have personalization options, especially for product areas that are already associated with individual style (like phone accessories or apparel).

► Don’t be afraid to pivot

Barnett’s idea arose from the need to untangle headphones. He took PopSockets to a promotional-product trade show without understanding the real value his product could provide to that audience. It’s important to have vision when building an eCommerce company, but don’t get too precious about it. Be open to switching gears if it’s not working as planned and a better opportunity presents itself.

Editor’s note: A previous version of this article overstated the amount of products PopSockets is selling each month.