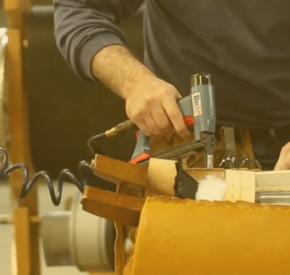 When Donald Graeme Moore started his business selling leather parts for shoes in 1933, he probably didn’t imagine it would become the renowned luxury leather business that it is today. He probably didn’t even have time to imagine the future — he was focused on the here and now, doing whatever it took to stay afloat after being laid off during the Great Depression.

What started as a small family business built off the need to survive is now a thriving company that sells its high quality natural leathers around the world. You may not think you know Moore & Giles, but you’ve probably sat on seats made from their leather in one of your favorite high-end restaurants or hotels (think: the beautiful booths at PDT in Manhattan) or swooned over products made from their wares in stores like Pottery Barn and Restoration Hardware.

Moore & Giles has prospered, even as it honors its long history as a provider of craft leather products, by embracing change. Guided by a set of concrete values, Moore & Giles approaches challenges and upheaval not as dilemmas, but as opportunities to disrupt the status quo and take the business in new and lucrative directions. They’re building a lasting business that can constantly evolve by staying grounded in their founding principles.

Finding opportunity in challenge and change

The ethos of evolution that Moore & Giles was founded on has continued through its 85-year history, and has undoubtedly helped it become the success it is today. It was present at the start when Moore was laid off at the age of 50 from his factory job at the Craddock-Terry Shoe Corporation, and, instead of despairing, started his own business. It was there again in 1980, when that same factory (which had become a client of Moore & Giles, representing about 40 percent of its business) closed their doors for good. “When Craddock-Terry went out we just felt like, you know, this might be the end,” Donald Moore Giles, Moore’s grandson who joined the team in 1966, shares in a company marketing video. “But then thought better of it and said, you know, we can do something else, we can change” — and so they shifted from shoe parts to selling leather for furniture upholstery.

Perhaps the riskiest change came in the 1990s when the company decided to stop dealing in the cheaper, “corrected” leather that was commonly used for upholstery at the time, and instead to put quality first, creating a home furnishing product that emphasized the beauty of natural, aged leathers. While the decision was scary — and they faced a lot of doubt and challenges while developing their new product — it was ultimately the one that put them on the map as purveyors of a new and better kind of leather.

“If you were to ask, ‘What is Moore & Giles?’ — even though we’re a leather company — we’re a company that’s willing to change and evolve,” says Daryl Calfee, VP of Marketing for Moore & Giles. “A company that’s not willing to evolve and grow gets stuck, and they’re soon dead. So I think we’re constantly asking ourselves how can we improve.”

Selling a physical product in a digital world

In 2007, the company decided to make another major change, launching a B2C line of bags, accessories, and home goods made using their own leather.

Calfee says it started as a selfish decision — “We were traveling all over the world tanning this beautiful leather, but dragging black nylon bags behind us. So the leadership of the company looked at each other and said, ‘We want bags made out of our leather'” — but they realized if they wanted it, others might, too.

Knowing that they had navigated so many changes before and come out a better company on the other side made it easier to jump into this new line of business. Ten years later, the risk has paid off — in more ways than they might have realized going in.

“What’s crazy is that, even though it’s only five percent of the business on a B2C level, it is elevating the brand on the B2B level because [customers are] seeing these personal finished goods in their homes and they’re like, ‘Oh yeah, that’s the same company that we bought the sofa from, and we loved their leather,'” explains Calfee on how this extra touchpoint has bolstered brand recognition and re-engaged customers. “It’s been a really good exercise for the whole brand.” Along with this, they decided to invest in a catalogue with stunning photography keep their leather top of mind for their target audience, and to use these new eCommerce capabilities to make it easier than ever for designers and other potential B2B customers to order free swatches of their leather.

Using your roots to build a stronger future

The company’s current leadership, Sackett Wood and Tray Petty, agree that they’ve had their disagreements in deciding the best way to move the company forward. “I would say we get along so well because we don’t always get along,” shares Wood in a video on the company’s site, explaining how they’ve been through some discussions where others might have given up, but have gotten this far because they know they can count on each other at the end of the day.

And it’s these very human values that Moore & Giles has had from the beginning that Calfee thinks have helped the company persevere every step of the way: “If you walk in our door on the walls you’re going to see, not only our mission statement, but you’re going to also see our core values, and at the base of all of that is be hospitable,” he says. “I think a lot of that comes from our Virginia southern roots — leadership has always believed in that you can never be too kind. So at the end of the day we’re going to be a company that creates beautiful leather, and we’re going to sell it for a price that’s fair, and we’re going to be kind to people. And I think that’s who we are.”

Putting kindness first has helped the Moore & Giles team weather hardships, consider other teammates’ crazy ideas, and take risks — knowing that they will have each others’ support no matter what happens. It has helped Moore & Giles keep the customer experience at the forefront of every decision they make, and keep their reputation intact even as the company changes and challenges the status quo.

Regardless of how the business model or the style of the product may evolve, these guiding principles have helped Moore & Giles build a brand that consumers adore — and that Donald Graeme Moore would be proud of.