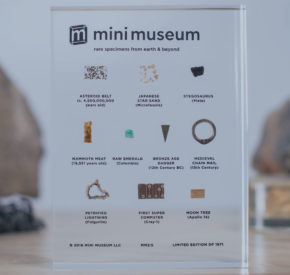 At the age of seven, Hans Fex’s scientist father brought home some artifacts—a shell and two temple fragments—embedded in epoxy resin to preserve them. Having always loved visiting museums and looking at the artifacts from afar, Fex loved how he could hold these in his hands, keep them close so he could observe them whenever he wanted. As he marveled at this, a seed of an idea was planted in his brain: What if you could do this same thing with a bunch of different artifacts, all in a small epoxy box? Like an entire museum that anyone could hold in their hands and keep in their homes.

It wasn’t until decades later, after getting laid off from his job as a product designer at retailer ThinkGeek, that he decided to try his hand at creating and selling these little collections. With the help of some of the people he had worked with at ThinkGeek, Mini Museum launched on Kickstarter with a $38,000 goal, enough to put an initial batch into production. Based on their experience selling unusual objects, the team imagined they would be able to bring in about $150,000 in revenue—enough for Fex to pursue his idea as a small business on his own.

They did a bit better than expected. In about 10 days, Mini Museum had raised $1.2 million, with several thousand people signing up to receive this first collection. Fex was able to hire the team full time in order to help him keep up with the demand. They’ve launched two additional Kickstarter campaigns since, raising over $1 million each time, making them one of only seven companies to have run three or more successful $1M+ Kickstarter campaigns.

After sifting through billions of years of history, bringing in millions of dollars, and shipping tens of thousands of Mini Museums, here’s what the team has learned about building a cult product that succeeds.

Originality and authenticity fuel the fire

Of course the first question is: how does a pre-launch company with no following succeed so massively with their first Kickstarter campaign?

Mini Museum co-founder Jamie Grove thinks part of their success was sheer luck, hitting the Kickstarter market at a time where there were a lot of copycats and nothing that felt fresh or exciting. Comparatively, Mini Museum was clearly an original product, and Fex’s authentic passion for the science behind it was obvious. That combination got people excited: Kickstarter shared the project in an email to their subscribers, multiple media outlets published articles highlighting the project, and from there the buzz kept growing.

“Kickstarter as a platform is one of those things where you need to have something that nobody’s ever seen before that’s really, really amazing because you’re up against a lot of great competition,” says Grove. “And then you either have to have a great press strategy attached to it or get lucky or have your own list of customers so you can bring the people there to get the initial wave that that gets you into the machinery of Kickstarter.”

You have to be your own most excited customer.

Grove thinks that sort of authentic passion is a baseline requirement for cult retailers, whether you’re using Kickstarter or not. You can’t just create something because you think it might be able to make you money—you have to be your own most excited customer, ready to truly geek out about your product. “When you get down to the level of cult retail, it’s about authenticity,” says Grove.

Put another way, “cult brands occur because they represent something greater—an ideal or a subculture—but also because they know how to communicate that message without it feeling contrived,” says writer Calum Gordon in an article exploring cult fashion retail. When you can authentically share your excitement for your product, other people with the same passions as you will get on board, too. And that’s not something you can fake.

The Mini Museum team knew what excited them about the product—but they also had to figure out what about it would excite their customers.

One angle they thought might work was focusing on the limited edition, collectibility of the product. But when they tested emphasizing this aspect via things like email subject lines, landing page copy, and targeted Facebook ads, they found only a small percentage of customers were driven to purchase by those motivations.

Instead, the majority of their buyers were excited by the science and the story behind each of the specimens in the Mini Museum. So the team invested in creating detailed companion guides to accompany each edition, including in-depth information about every specimen and its significance. In their marketing, they’ve focused on nerding out about the specimens themselves—even sharing behind the scenes looks at how they source and process the specimens for inclusion in each Mini Museum. For example, “the parts of the Golden Gate Bridge that we used in the second edition were never meant to be broken,” says Grove, “but we were making small pieces … out of metal that was never meant to be taken apart. People like that story and they like the story of how we are representing those objects.” By letting their users experience the product with them, they’ve built even more cult enthusiasm.

Grove recommends anyone else working in cult retail take a similar testing approach to get at the heart of their customers’ interests. Running multivariate tests is “easy to do and it can help you avoid assumptions about what people want, which is a real problem when you are super close to the subject matter yourself.”

As they grow, Mini Museum is keeping its users’ desires top of mind, making sure their focus on storytelling remains central even as they evolve the product line. But growth and change is a tricky subject in cult retail. If you brashly launch new products to try and appeal to larger audiences, you risk losing your original dedicated following.

“You’ve got to really balance the product that you’re creating right now that has all of your customers very, very excited with strategies that introduce new products that bring you to new customers,” says Grove. “So, for example if you launch an item that is tone deaf to your customers but might reach a whole lot of other people, you will just lose everybody really quick. If you lose people before you’re really ready to take off, that could be the end of the business right there.”

Once you’ve made that mistake of compromising the product you can’t go back and fix that, and your customers will remember.

With 30-40 percent of their business coming from return customers, Mini Museum is very cognizant of this. For every new edition that they launch, every specimen they evaluate, and every new product they consider, the team carefully scrutinizes whether it fits their brand. When making the decision to launch a line of jewelry, for example, they made sure the products were in line with their mission to provide people with a piece of the universe and that they felt unique from other science jewelry on the market.

And they’re purposefully growing slowly to ensure they’re able to take care of their core customers every step of the way. “Once you’ve made that mistake of compromising the product you can’t go back and fix that, and your customers will remember,” says Grove.

Cult retail can be a hard business, where you find yourself wondering if you’re going to find enough people who care about the same things you do to make a living. But it can also be incredibly rewarding, allowing you to share your niche passion with the world (and make money from it!). If you can share this authentic enthusiasm to get others excited, figure out what narratives about your product resonate with buyers, and continue to be true to this story at every step, you can build a dedicated audience that will be excited to purchase whatever you release for years to come.