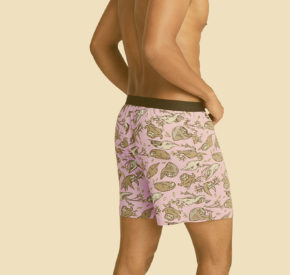 Underwear can be sexy and fun or it can be boring and mundane. Underwear sold via subscription sounds, at first, a lot closer to boring. If you’re going to sign up for regular underwear delivery, it’s probably going to be the utilitarian variety, right?

But MeUndies—a thriving subscription underwear brand founded in 2011— has made it work by using targeted ads and video content to show the unique value, comfort, and personality of their brand and products.

The company creates content that makes strong statements and they don’t shy away from the sensitive topics that matter to their target customer: body positivity, LGBTQ rights, slut shaming—nothing is off limits. And MeUndies regularly connects with influencers to increase awareness and position their product as the hip, stylish alternative to other “utility” underwear brands like Hanes or Fruit of the Loom.

“The way we describe [our underwear buying experience] in house is ‘un-boring comfort.’ The core of our company is to have fun, it’s what we really like to promote, and underwear is our vehicle for doing that,” says MeUndies CEO Bryan Lalezarian.

By getting people excited about their brand and engaging with customers on social media, MeUndies attracts people who not only buy underwear but also buy into the brand. They’ve grown to more than 50,000 subscribers. Read on to find out how they do it.

MeUndies casts a wide net with their social media strategy—you can find their ads on Facebook, Instagram, Pinterest, and Snapchat. Through a combination of smart targeting and often-bold content, they create ads that boost awareness of their brand as well as the values that appeal to their target customer. MeUndies positions themselves as the go-to underwear company for a younger generation.

According to an eMarketer study from April 2018, while less than 10 percent of the total U.S. population had received a shipment from a subscription-box-type service in the past month, that number jumps to 25 percent for those aged 18-29. Another study, from McKinsey, found that eCommerce subscribers tend to be between 25 and 44 and are more often women. So it makes sense that MeUndies has developed an aesthetic that appeals to a younger demographic, and that their use of sex appeal in their advertisements is not the near pornographic variety you might expect in ads for usually male-targeted products like alcohol or sports cars. (Their ads have tended in that direction in the past, but more recently appear to have taken a different tack.)

As an underwear company, it’s no surprise that MeUndies subscribes to the age-old adage “sex sells”—but not in a lounging lingerie-model way. Their ads definitely show skin, but they predominantly showcase the comfort and style of their product as opposed to showing skin simply for the suggestiveness of it.

“One thing we really love to do is [show] people in underwear doing things,” MeUndies senior brand manager told Racked in 2015.

And it’s not just their language that can be daring. The imagery in their ads has also been seen as testing limits of propriety. Most notably, they were banned from Facebook for the following ad:

Not being the type of company to shy away from a statement, MeUndies responded in turn:

While MeUndies did eventually get the ban overturned, their response ads netted them three to five times the click-through rate than average. The response ads are what people remember. They used the Facebook ban as an opportunity to stand up for themselves, which reinforced their brand values of “going further” and “championing differences” by showing they won’t let themselves be pushed around. That, in turn, lends greater credibility to their cause marketing efforts, like the male body positivity campaign they ran in 2017 with Eddie Huang.

Millennial consumers are willing to spend more on products that support causes they believe in. That type of social responsibility marketing has more impact if it comes from a company that has shown it is willing to push back against outmoded or paternalistic policies.

(And it appears all is forgiven, since Facebook actually uses MeUndies as a case study for its ad platform.)

MeUndies uses their social media ads to connect with an audience that shares a similar set of values. They’re not afraid to poke fun at conventions or stand up for what they believe in. This helps them attract younger customers who are willing to spend more for products that they identify with.

Tell a story that shows your brand’s personality

To stand out in today’s crowded market, brands need to have a narrative that differentiates their company from the competition. For MeUndies, this means moving away from traditional underwear advertising tactics—think high-fashion models posed in black and white—toward something more dynamic and fun, using a lot of GIFs and videos of their products in silly situations.

On the videos section on their website, which features short commercials and films about their products that highlight customers, influencers, and artists, MeUndies plays up their humorous approach. “We take life a lot less seriously than we take undies,” the page reads, “so check out our video channel and keep up with our antics.” That stands in stark contrast to incumbent brands, whose websites tend to talk more about product features than personality.

These videos are then repurposed for social ads and boost the perception of MeUndies as a fun and relatable brand. Whether they’re playing up the comfort, the sexiness, or the design of their product, MeUndies tells a story about their brand.

Moving ads have much greater engagement and reach than static ads, especially on social. MeUndies uses video and GIF ads prolifically across social media channels to capture more of their potential customer’s attention.

MeUndies is also adept at optimizing their ads for online channels. At 15 seconds long, the “Star Wars” ad above is in the sweet spot for both Percentage Point Lift in Ad Recall and Percentage Point Lift in Brand Awareness. Using short, humorous ads, MeUndies cements their brand in the customer’s mind and boosts overall awareness of their products, while still showing off their products and their personality.

MeUndies uses the same tactics on Instagram, Pinterest, and Snapchat. They also offer exclusive items through targeted ads to make customers feel like they’re getting something special by paying attention.

By ensuring that each ad tells a specific brand story—and incorporating movement into their ads, which is more likely to get featured by ad algorithms—MeUndies attracts an audience that buys into the company’s brand narrative.

Deepen your customer relationships through membership

As a subscription eCommerce company, MeUndies’s overall success is tied directly to the effectiveness of their ongoing relationships with customers. MeUndies has recently expanded upon their subscription model and launched a membership option built around discounts and limited-edition items. By creating a sense of exclusivity for members, rather than just offer the convenience of automatic delivery, the company builds stronger relationships with their community and makes it more likely that customers grow into brand advocates and evangelists.

By adding additional benefits on top of convenience to their subscriptions and packaging everything as a membership, MeUndies enhances its relationship with customers who are primed to become the brand’s most outspoken advocates.

The shift to membership is about “taking a customer that’s [already] engaged with our company and further investing in the program,” MeUndies founder Jonathan Shokrian told AdWeek. “This is further investing in a core consumer that spends three times more on our website, and we’re anticipating a 47 percent increase in lifetime value for this core customer.”

The membership model adds exclusivity and makes the brand more aspirational and experiential, another hallmark of millennial shoppers. According to one study, almost three-quarters of millennials prefer to spend their money on experiences rather than material goods. For a company like MeUndies, that clearly sells stuff, the membership model ads a layer of experience that makes it more appealing to their core consumer.

These are also the people who amplify MeUndies’s social media reach through retweets, recommendations, and engagement. MeUndies is very skilled at getting people to share photos of themselves on social media in nothing but their skivvies.

The company regularly encourages its followers to share photos on social media. They also work with influencers to kickstart social media campaigns and get their followers involved. One influencer campaign last year, a cause-marketing campaign with the True Colors Fund that raised money to combat LGBTQ homelessness, reached 4.7 million people on Instagram with a 7.13 percent engagement rate.

As a digital-only brand, MeUndies is competing with a number of larger and more established companies as well as a competitive and crowded market. Tapping into membership replenishment is a way for MeUndies to retain customers by augmenting their existing relationship.

The MeUndies membership program acts as a way for the company to add an experiential element to the usually mundane process of purchasing a commodity product. By offering discounted products and member-exclusive prints they’re able to increase the potential for social sharing. Members will be more likely to talk about the special perks they get as a result of membership and recommend it to their network.

MeUndies applied the subscription eCommerce model to an unlikely market—underwear. With a strong sense of personality and a take-chances attitude toward social media, they’ve been able to grow their brand to a $32 million company since 2011.

► Have a strong personality

When you encounter a MeUndies ad, you know it immediately. They have fun and show some skin, but in the end, it’s all about comfort. You need to understand what will attract customers to your product to have a successful ad campaign.

► Be fearless with ads

MeUndies was once banned from Facebook for showing too much skin. They responded by mocking the censorship directly. Don’t be afraid to challenge people’s perception of your brand or stand up for your brand’s values. That gives you a way to find customers who are more engaged with the product.

Through subscription and membership, MeUndies is building a community of advocates who act as micro-influencers for the brand. It’s important to have a community to share and amplify your message on social media. Friendly recommendations are more powerful when they come from real people.

Most of the company’s social media ads are light on text. They’re able to create a narrative around their brand by showing the product in use while also having some fun. When you’re building a social media strategy, think about what kind of ads are going to resonate most with your target customer.

To connect with a younger audience, MeUndies needed to find ways to insert their brand into the conversation. They’re outspoken on gender identity, body positivity, and more. When you’re looking for customers to join a subscription eCommerce business, it’s important that they identify your brand with the right values.