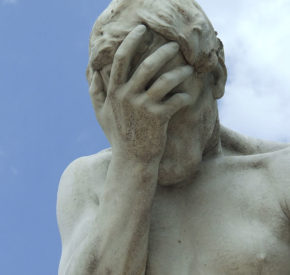 You’ve just hit send on your latest email marketing campaign to promote the launch of your new product line. You know your customers will instantly fall in love with the product, so all that’s left to do is sit back and watch the sales roll in. But instead of a huge batch of orders, you receive a huge batch of complaints—it turns out you put the wrong discount code in your email and it doesn’t work.

If the thought of sending an email campaign with a faulty discount code, a pricing mistake, a broken mail merge that just puts {NAME} instead of every single customer’s name, or even a glaring typo keeps you up at night, here’s the good news. It’s not the end of the world. With the right follow-up, you can correct a mistake you make in your eCommerce store’s email marketing —and maybe even transform the mistake into a unique sales opportunity.

In this article, we’ll cover the five steps you should take if you make a mistake in a marketing email to correct, remedy, and maybe even benefit from the situation.

One cold, hard reality of email marketing is that once you’ve hit send on a campaign, there’s basically no turning back. Your email will start hitting inboxes in a matter of seconds or minutes. You can edit a Facebook post or delete a tweet, but you can’t alter an email once it’s been delivered. Some platforms give you the option of discontinuing a send, but you’ll have to catch your mistake immediately to stop your email from reaching the majority of inboxes.

So if you discover an error after your email is sent, the best thing you can do is give yourself a minute to digest the situation, assess the potential damage, and put clear-headed thought into your best course of action. The very last thing you want to do is pile on to your own mistake with more mistakes in a rushed apology email.

Remember to breathe, and then put your effort into the one thing you can control: your response.

The following apology email from Midwest Supplies was sent several hours after “technical difficulties” occurred with an email earlier in the day. The company clearly took the time necessary to fix the issue, and then calmly sent an email to let their customers know that the free shipping promotion was now functioning properly.

You need to calmly assess the scope of a mistake to determine the proper, proportional response. Was the mistake catastrophic? What’s the maximum damage it could cause?

If the mistake is as simple as a misspelling, minor grammatical error, or misaligned graphic, you might feel a little embarrassed—but ultimately it’s not in your best interest to issue an apology. After all, most of your customers probably didn’t even notice (or care), so why unnecessarily shine a light on the mistake?

The next tier of email marketing mistakes, however, might require a well-calculated response:

At this stage, your job is to determine if a follow-up is warranted—and, in most cases, it will be. One obvious benefit of sending a follow-up email with correct information is that you’ll have a better chance of achieving your campaign’s original goals. Another benefit is that you’ll convey honesty and transparency to your customers at a time when your reputation might have experienced some degree of damage.

You’ve taken a moment to breathe and you’ve taken the time to assess the gravity of your mistake. Your next step is to plan your response.

If you’ve determined that your mistake does require a correction, clarification, apology, or other follow-up, then you’ll want to work quickly and carefully to put your response into motion; issuing a correction on the same day is ideal.

In virtually all cases, a single email is going to be sufficient to clear up the confusion and annoyance that may’ve resulted from an errant email campaign. Keep your explanation clear, direct, and as brief as possible. Offer up a genuine apology, try to make good on whatever problem your error may have caused—and call it a day. There’s no need to flood your customers with multiple apology emails, which might even make the apology more irritating to them than the initial mistake.

Here’s an example of an apology email from FilterEasy for accidentally sending out an unplanned email. Because the mistake is fairly benign, they’re apologetic but still add some levity, and they don’t belabor the point. They use a good-natured subject line (“Oops: Someone Hadn’t Had Their Coffee Yet This Morning”), offer a sincere apology, and give an honest explanation of what went wrong and why it won’t happen again.

JuJuBe keeps this apology email upbeat with a humorous (and mobile-friendly) subject line (“Party Foul 🙈”) and copy that conveys excitement as much as it conveys remorse. The email complements the apology with an amusing graphic, encouraging subscribers to quickly shift their focus away from the mistake and onto what’s being promoted.

But… if your mistake is so bad that you can’t make light of it, definitely shelve your humor. Like this email from Adidas, sent to Boston Marathon runners just four years after the bombing at the 2013 race.

As you might imagine, their apology did not employ humor.

Step 4: Look for potential opportunity in the mistake

You may’ve heard the old cliche that the Chinese word for “crisis” is the same as the word for “opportunity.” While that’s not exactly true, we’ll still borrow the intended lesson for a moment. When you’re assessing a mistake in an email, consider if there’s a way to turn that crisis into a business opportunity.

Maybe you promoted a discount that was too high… but come to think of it, you probably could afford it with your margins. So your follow-up “apology” email would actually be a way for you to let your subscribers know you’re offering an unprecedented, we’ll-never-give-this-large-of-a-discount-again-so-buy-now deal.

Maybe you announced a product debut too early, so the product page wasn’t ready on your site—but with all the interest you generated through the errant email, you can use your “apology” email as a chance to take pre-orders. Whatever the case, if you can correct a mistake by turning it into an opportunity, that’s an all-out marketing victory.

Here’s an example from Travelocity. Rather than rescind a discount code that accidentally gave customers double the intended discount, they used the mistake as an opportunity to extend that bigger discount to their subscribers.

So much of your store’s success relies on a feeling of good will between you and your customers. Rather than rescinding a coupon code or refusing to honor an advertised price, really try to find a way to honor it. That will go a long way toward growing your customers’ sense of trust, loyalty, and goodwill toward your brand.

Step 5: Learn from your mistake

Once you’ve successfully navigated your apology, it’s time to examine your email processes to try to avoid making a similar (or different) mistake in the future.

The first step is to tighten up your editing and pre-send process. Aim for multiple rounds of team proofreading before you queue up an email for delivery—sometimes all it takes is a second set of eyeballs to catch a small error or to notice a piece of information that’s inaccurate or out of date. And consider creating a complete quality assurance checklist that you’ll review before sending each email campaign. Even if you’re sure your email is perfect, go through each item on the checklist before you hit send.

And as a second step, always send test emails for each campaign. See how your email shows up in your own inbox (and across platforms and screen sizes), open it, test the links, and make sure the graphics are properly aligned.

Mistakes happen with marketing emails. And when you make one, you don’t want to compound the mistake by rushing out an apology with even more mistakes. Instead, follow this five-step list to properly assess and handle your mistake, potentially turn it into a positive, and avoid making it again.