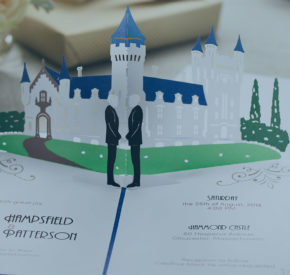 Whether it’s Mother’s Day, a cousin’s wedding, or your best friend’s birthday, the supermarket greeting card aisle is a place you usually don’t want to be. Thousands of cards and yet somehow, none of them say exactly what you want.

Despite greeting cards’ saccharine messaging, lack of ingenuity, and corny jokes, you might be surprised to find out that Americans still buy approximately 6.5 billion every year.

Yet, even with that that big number, the industry as a whole has fallen on difficult times. Facebook and Instagram have given us the ability to send personalized messages to friends and family at the click of a few buttons. Social media is slowly commoditizing sentiment in the form of likes and shares. With all that physical greeting cards are lacking, why get into the market now?

It’s simple, receiving a physical greeting card still feels more thoughtful and more personal than an electronic message. Lovepop wagered that if they could create a unique new kind of greeting card experience, they’d be able to differentiate their products from the rest of the market, and grow even as the industry stagnates.

Bringing together new design ideas, a focus on efficient technology, and their own unique personality, Lovepop is disrupting the greeting card industry. Their dream of giving customers a new way to say thank you, happy birthday, congratulations, or ::wookie noise here:: helped Lovepop build an eCommerce company that’s changing how customers think about greeting cards.

Turning an art form into industry

Cofounders Wombi Rose and John Wise came up with the idea for Lovepop while on a college trip to Vietnam. They found themselves enamored with the handmade paper cards they received while there. Each card showcasing an intricately cut paper pattern that, when unfolded, created beautiful 3D designs. So they started teaching themselves about the art form, which is known as sliceform kirigami.

Upon returning to the U.S., Rose and Wise became obsessed with the idea of bringing this paper art form to America and starting a business to sell the unique cards they so enjoyed. They started by incubating the idea at Harvard Business School, where both were studying naval architecture and engineering.

In 2014, Rose and Wise secured some of their funding for the new company via a Kickstarter campaign that was fully funded in five days. This was followed by two seed-round funds (including a trip through startup accelerator TechStars) and a $300K investment from Kevin O’Leary of Shark Tank fame.

400 percent revenue growth in 2016 and 270 percent growth in 2017 put Lovepop on the map and led to a recent venture funding round of $12.5 million in January of this year. They plan to use this new capital to expand their custom wedding invitations product as well as bolster their marketing, technology, and design teams.

This jump into the wedding market is a great example of how Rose and Wise are strategically expanding the Lovepop brand. Lovepop applied Lean Startup methodology to their growth to gauge customer interest in their new design ideas before production even began. They created a landing page to ask customers if they’d be interested in sending Lovepop-style wedding invitations and received 1,800 submissions. That signal validated their moving forward with the new products and ensured their success.

This type of methodical approach is a hallmark (pun intended) of Lovepop’s growth.

Bringing personality back to the greeting card

In the years before Lovepop came around, interest in the greeting card industry had seen a consistent decline. Where 25 to 30 years ago sending a physical card was de rigueur, the industry had lost a lot of the market to social media and the rise of eCards.

Lovepop recognized these factors and worked to really nail down their product-market fit. With special occasions moving more and more toward social media announcements, Lovepop found a way to inject some much-needed personality into the anachronistic supermarket greeting card. Here are a few ways they made it happen:

Each of these things not only differentiates Lovepop from their competitors, but also helps them create a brand that has their own personality. When someone receives a Lovepop card, they know it—there’s nothing else in the market that matches their product’s look and feel.

In this way, Lovepop is changing the entire experience of receiving a greeting card. They see their cards as gifts, something that can inspire the same kind of emotional response. By rejecting the gimmicky nature of existing 3D popup cards, Lovepop created a product that feels premium, and so receiving one seems special.

Not only has Lovepop brought personality back into the greeting card industry, they’ve done so in a way that fundamentally changes the customer experience and anchors their brand with those emotions.

Kirigami is a traditional paper-cutting art form that is believed to have originated in China in the fourth century A.D. Rose and Wise came across the art form on their trip to Vietnam and wanted to find a way to produce on a larger scale the kind of cards they’d received. Wombi told Inc.:

“I fell in love with this ancient art, and I’m an engineer by training, so the design aspect is just really fun. That’s why I got excited about it. We’re a customer-driven brand, direct to consumer, and we spend a lot of time with our customers. Watching their reactions showed me how special it was.”

To incorporate the traditionally handcrafted medium, Lovepop needed to find a way to manufacture their cards at scale without losing the specialness tied to how each card was created. Their background in naval architecture and engineering helped them find their solution, because they were already familiar with the kind of tools that could facilitate this kind of creation.

Each card is created by a designer who then mocks up their idea with 3D modeling software. Each piece of the card is laser-cut to exact dimensions, and the requisite pieces are then assembled by hand in Lovepop’s factory in Vietnam. The process takes between 20 and 30 minutes and is shown in its entirety in this video.

Lovepop’s use of technology to handle the modeling and cutting of each card design considerably reduces the time it takes to produce a final product. That, coupled with the fact that each card is actually assembled by hand, means that Lovepop is able to scale their manufacturing without taking away from the handcrafted artistry that each card is meant to display.

Being able to craft this kind of card at scale is another way that Lovepop is differentiating from the rest of the greeting card industry. Yes, Lovepop cards are still being produced on a large scale, but it’s being done in a way that doesn’t make them feel mass produced.

Lovepop is a part of an industry that revolves around special occasions. Their products are tied to those big moments, which means they have ample opportunity to solidify their relationship with their customers as well as the card’s recipient. Lovepop does an excellent job of connecting with their audience for these events, as well as figuring out which social media channels are best suited for promoting their brand.

Whether Lovepop is featuring an Instagram story on their #FridayFeeling hashtag to show how their cards were used in an elaborate engagement or they’re promoting product launch videos on Facebook, they’re always connecting with their audience. Coupled with an original bump from their Shark Tank appearance in 2015, this engagement has led to steady growth in their referring domains.

Their pre-holiday-season appearance on Shark Tank grew their unique website visitors from 40 to almost 35K on the night the episode aired. This push gave Lovepop the momentum they needed to start building an engaged and loyal community, which they’ve turned into 46,000 Instagram followers, 191,000 Facebook followers, 11,000 Twitter followers, and a whopping 521,000 monthly views on Pinterest.

Alongside their audience building efforts, Lovepop also invests in paid advertising on these different platforms. Their ads go after everything from branded keywords like lovepop or lovepops cards to more generic terms like birthday card and pop up christmas tree. You can see the percentage of incoming paid traffic generated from each of these keywords in the following breakdown from Ahrefs.

Using these keywords Lovepop is able to create ads that feature their cards for these different occasions, and display them to customers in various social networks.

Lovepop spends a lot of their ad dollars on Facebook (including Instagram) and Pinterest, which have become the de facto places people plan and announce special occasions. They’re also visual mediums, which let Lovepop show off the designs of their cards. By using video and image carousels, Lovepop is able to show off how their cards work and overcome the “touch-and-feel-barrier” that many eCommerce companies struggle with.

Each of these channels serves a very important purpose in their overall social media strategy. By connecting with their customers in the channels that best suit their brand, Lovepop is able to promote their personality to an expansive audience.

Lovepop has disrupted and energized a dwindling market by bringing their personality and eCommerce business model to the greeting card industry. They create cards that connect with customers during special occasions and help celebrate the big moments.

The greeting card industry was in dire need of something new. Lovepop found a way to offer it. When thinking about where your product fits in an existing marketing, it’s important that you understand how your company can differentiate from the competition.

Lovepop found technologies that have helped them streamline their manufacturing processes without taking away from the handcrafted feel of their product. Use whatever technologies you can to make the production process easier, but make sure they don’t detract from the personality of your product.

Greeting cards are designed to make people feel something. By creating a product that has personality and giving customers a way to personalize it, Lovepop has reinvented the greeting card. You need to be able to show the personality of your product and your brand to give customers a reason to buy it.

► Connect with your audience

Social media helps to amplify your message. Word-of-mouth marketing is great for adding a level of credibility to your product, but when you connect with customers online, you can spread that message even further.

► Use upsells when possible

Lovepop offers to ship directly to the recipient and has a paid service to include a handwritten note in their cards. Find ways to offer additional products or services to your customers that can expand your revenue and make the buying experience the best it can be.