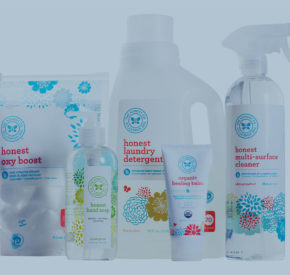 When you call something a unicorn it’s basically saying that it shouldn’t exist, which is why Aileen Lee chose that moniker for a certain kind of startup company: a private company sporting over $1 billion in valuation. Unicorn startups are both rare and improbable.

Nevertheless, The Honest Company attained unicorn status in 2015. A billion dollar valuation doesn’t insulate a startup from difficulty—even successful companies have their ups and downs. After a meteoric early rise, The Honest Company ended up raising a down round in 2017, dipping below the $1 billion valuation unicorn cutoff.

Today, The Honest Company is back on the upswing. The once-popular, then struggling, darling of the safe, eco-friendly, and all-natural market is having a resurgence of late-life success. We’ll take a look at how The Honest Company’s explosive growth has shaped their product offerings, how their hardships helped refocus the company mission, and what they’re doing now to regain a foothold in this popular market.

The Honest Company is a great example of how leadership can assess difficult times, work to provide customers with the best possible product in-house, and build a community for their mission-based products.

After a failed original pitch in 2009, Alba spent the next few years researching the consumer goods market and eventually ended up in Washington, DC to lobby for updated legislation to reform the 1976 Toxic Substances Control Act.

Renewed with her knowledge of the market, and backed by her extensive familiarity with relevant legislation, Alba connected with co-founder Brian Lee, a serial entrepreneur who previously cofounded LegalZoom.com  and ShoeDazzle.com, in 2011. Lee, a parent himself, was swayed by Alba’s pitch about the dangers of many of the chemicals in household items, and especially those made for children. The pair reportedly put $6 million of their own money into the company to get it off the ground and started the process of going after additional funding again.

The Honest Company experienced amazing growth in their first year, hitting $12 million in revenue in 2012. This grew to $150 million by 2014, and finally a valuation of over $1 billion in 2015. The Honest Company was a unicorn company just a few years after launch.

This meteoric growth was fueled by several big rounds of funding in the early years and a relentless focus on brand-building and social media reach. The company concentrated on building a business with a message. Early funding went towards growing The Honest Company’s team as well as their product offerings. They built their brand around the idea that childcare products should be safe, affordable, and eco-friendly—this became the company’s guiding manifesto, called the Honest Standard.

Tapping into the eCommerce market first as opposed to going after brick-and-mortar stores was important for The Honest Company early on. Cofounder Brian Lee had seen success with the online-only model in the past, backing companies like Warby Parker, where subscriptions for regularly replaced products made customer acquisition easier.  That’s one of the big reasons The Honest Company initially focused on building a subscription service for diapers, something new parents often find they run out of at inopportune times. At least, that was Alba’s experience, and it led her to an epiphany: starting with an eco-friendly, non-toxic diaper delivery service would give The Honest Company an entry point to the homes of their target customers, and provide a predictable revenue stream.

Alba and her team were also able to focus on building a community of social media followers that appreciated the company’s mission. This not only solidified The Honest Company’s image, it also gave them a way to invest more of their capital into the products instead.

Starting as an online-only store was not the only thing that helped kickstart The Honest Company’s growth. Alba’s association meant that she was able to leverage her then five million social media follows to promote the brand. As an already outspoken advocate for natural and ethical childcare products, Alba could easily connect with her audience as an authority.

Using social media as a way to amplify their message, Alba and her team focussed on outreach that would help their community. Their focus on social responsibility led to partnerships with March of Dimes, Baby2Baby, #GivingTuesday, and many other philanthropic organizations. This not only aligned with The Honest Company’s mission, it grew their community of like-minded people and companies.

The Honest Company has focused their promotional efforts on social media more over the past several years, connecting with their audience through YouTube, Facebook, and Pinterest, as well as Instagram, where Alba is still very active.

Too good to be true

The Honest Company’s success helped to make their products a household name in safe and eco-friendly consumer goods, but it also meant an increased scrutiny of their practices. By building a highly engaged and active community, The Honest Company was in some ways setting themselves up for more fervent backlash in the face of any future issues.

As the company grew, they expanded their product offerings into several new lifestyle and home markets. This was a shift from their original focus on baby and beauty care items, and ended up causing difficulty when some core products suffered.

Leading up to 2017, The Honest Company hit several snags, including a voluntary recall of its baby wipes, a reported ingredient-labeling issue, and a class-action lawsuit over the ingredients used in some products. These issues not only hurt their image, but cost The Honest Company a significant amount of money.

After reportedly missing out on a near-acquisition by Unilever (Unilever went for Seventh Generation at a $600 million buyout instead), The Honest Company raised a down round in 2017 at a valuation below $1 billion. These struggles led to several significant changes in the company’s business model, and a change in leadership.

After hiring a new CEO, The Honest Company started to scale back production on some of their newer products. They shifted focus away from a broader product offering and back to the core products that informed the company’s initial growth: childcare, beauty, and lifestyle. This change allowed The Honest Company to reevaluate their production methods and how to align those more with their company values.

Refocusing the mission and a comeback

In the wake of several regulatory issues between 2015 and 2017, The Honest Company needed to make changes in order to survive. Their previous CEO, Brian Lee, stepped down and the company hired Nick Vlahos, the former COO of The Clorox Company. As a two plus decade veteran of the consumer packaged goods market, he had ideas on how The Honest Company could put its series of missteps behind it and turn over a new leaf. He also previously worked with Burt’s Bees, another mission-driven consumer products company.

By losing focus on quality control of their core products, The Honest Company alienated the part of their audience that was concerned with safety and eco-friendliness. They decided to fix this by bringing research and development, as well as quality assurance, in-house. This meant that Alba and The Honest Company would have complete oversight on the manufacture of their products. “We do our own formulas in-house, and then we work with manufacturing partners to make it at scale,” Alba told the crowd at the Wall Street Journal’s Future of Everything Festival earlier this year. “That’s very differentiating compared to others in the marketplace, where they normally [rely] on a third party manufacturer to help co-create create the formulas.”

Alba and Vlahos also slimmed down the company’s product line to focus specifically on their best sellers.

“We have to drive good growth on a consistent basis, which means getting out of businesses we can’t win in,” CEO Nick Vlahos told the Wall Street Journal. That means doubling down on the diaper business that still drives about 75 percent of the company’s revenue, and focusing in on the baby and beauty product lines that drove so much of its early growth. The company announced plans to launch or relaunch more than 80 new products in those categories by the end of 2018.

Bringing R&D functions in-house, and scaling back The Honest Company’s product offerings, gave them a way to refocus on the original mission, providing safe, eco-friendly, and affordable childcare products. Concentrating on what their customers associated with the brand in the first place helped to set the stage for what looks like a comeback for The Honest Company.

Toward the end of 2017, The Honest Company experienced a significant dip in referring pages. The previous two years had been tough and the company was losing traffic from popular blogs that typically advocated for their products. The changes now being implemented by Vlahos and championed by Alba have helped to fight off further decreases.

While there was a down round in 2017, consumer brand-focused private equity firm L Catterton has recently infused another $200 million in The Honest Company. This funding will be used to help the company move into a more multi-channel distribution method, with certain brick-and-mortar stores now carrying their products. It will also help to support the new in-house R&D and quality assurance teams working on new products.

The Honest Company was a popular example of what a unicorn company could be in their first few years, but product recalls and a class action suit damaged their reputation. They buckled down on what made their company successful in the first place and are seeing renewed growth in 2018. Here are a few takeaways from their journey.

► Unicorns are rare for a reason

Unicorns are mythological beasts, they’re made up of ideals and special circumstances. Having the over $1 billion dollar valuation that makes you a unicorn might not last, it’s important to concentrate on the things that made your company successful in the beginning. Focus on growth and a providing value to customers.

► Have a mission and stick to it

Never forget what your company set out to do. The Honest Company fell short of their customer’s expectations by falling behind their mission, and suffered losses because of it.

When you offer a mission-based product, any perceived dip in quality could mean disaster. Make sure that every product you offer is always of the highest quality and aligns with your brand mission and ideals.

► Don’t offer more than you can handle

Expanding into new markets, or offering new products, is a great way to grow your business, but it’s more difficult than optimizing your current ones. As your company grows, you need to make sure that every product you offer, new and old, maintains the same quality.

► Course correct when you need to

Don’t be afraid to step back and assess your failures. When a company grows, it will inevitably change, and your team will need to have the right perspective to move in the right direction.