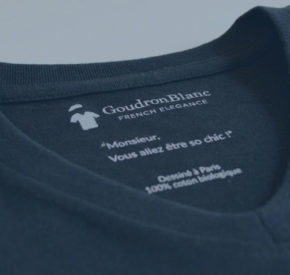 The following is a guest post from Guerric de Ternay, an eCommerce entrepreneur who runs two successful online fashion brands. In it he discusses the big mistake he made when launching his first company, and how the lessons he learned helped set him up for later success.

Like many entrepreneurs, I fell in love with what I believed was a brilliant product idea.

For the third time I was disappointed by a t-shirt I’d ordered online. Each time I was excited to unbox them and try them on, and each time when I put on my new white t-shirts, I realized immediately I wouldn’t be able to wear them in any professional setting. They were nearly transparent. I was struggling to find a great t-shirt.

So I thought, “What if I just created the perfect t-shirt instead?”

At the age of 20, equipped with little more than my enthusiasm and some experience in digital marketing, I set out to launch a new fashion brand that I called GoudronBlanc.

I had no background in fashion and clothing, so I had to learn the trade. I did what I think most entrepreneurs do when they enter a new industry: I surrounded myself with fashion experts and started scouting for the right supplier.

Months later, my prototype was done, photos were taken, product pages designed, and the first collection–a few hundreds GoudronBlanc t-shirts–was on its way. The day the t-shirts were delivered, I immediately made them available on my eCommerce store.

I sold a few shirts to friends and family. But it took a while before I got an order from someone I didn’t know. And those were few and far between.

But then, it hit me: I didn’t have a clear proposition.

Yes, I had a great product–a beautifully made t-shirt that fit well (and wasn’t transparent!). But I had no idea who my target audience was.

I couldn’t believe it. Even with a background in marketing, I made an obvious mistake. Eager to start something, I fell in love with a product idea and decided to sell it without figuring out who would actually buy it.

I knew the theory, but my enthusiasm trumped me.

I had a hunch that people would want premium t-shirts. But that was it…

So I decided to take a step back to identify a target audience for GoudronBlanc.

Finding your audience after you launched your business

When I think about the methodology I ultimately adopted to figure out who I would sell to, it is similar to the build-measure-learn method found in the Lean Startup.

I started by doing some qualitative customer interviews. It’s important, when doing this type of market research, to avoid trying to sell your product and focus instead on learning about your audience.

Doing this helped me learn that many men started switching from wearing suits at work to wearing t-shirts.

Instead of starting with a product, focus on scouting for a target audience first.

I then refined my hypothesis by pitching this to fashion influencers and pushing online ads. Running these types of experiments helped me build the conviction that I was onto something.

I was on my way to find a potential audience for GoudronBlanc. I found that my customers were people who recently changed their worldview. This led to an opportunity to serve them better than current brands. And I was really lucky! The product I had–these high-quality t-shirts–were exactly what they wanted.

This helped me shape the right value proposition for them: elegant t-shirts for men who want to be able to wear them at the office.

Indeed, wearing a high-quality t-shirt doesn’t make you feel the same. It makes you feel sharp. It’s like wearing a nice suit. It gives you the confidence that you are presenting yourself in a positive way. So much better than wearing a cheap t-shirt.

That’s the user experience I aspire to create.

While my initial hunch about the need for this product ultimately proved right once I found the right positioning, I was lucky. I shouldn’t have rushed into product production before defining my audience.

And I wasn’t alone.

Talking to many entrepreneurs, I realized I wasn’t the only one who experienced this situation. Many people who start their own eCommerce store also fall in love with the products they want to sell, even before being sure that there’s an audience for such products.

This tricky period at the start of GoudronBlanc was a great learning experience for me.

So I wanted to help entrepreneurs avoid making the same mistake. It pushed me to publish The Value Mix, a book that presents tools to create meaningful propositions for a specific target audience.

How does that work?

Besides helping others, this book also helped me codify my view for creating eCommerce brands. This was really helpful, when I started building a second sustainable fashion brand called Blackwood.

Instead of starting with a product in mind, my cofounder Oskar and I focused on scouting for a target audience.

We began by paying close attention to the leather goods market. And we noticed that there was a clear change happening. By doing customer interviews and listening to the conversation on social media, we confirmed that more and more people want products that both stylish and environmentally sustainable.

But the use of animal leather in fashion pollutes a lot: on a daily basis, 50 million liters of highly toxic water are generated from tannery waste. That’s the equivalent of 20 Olympic swimming pools (per day)!

We saw the opportunity to help our target audience get and give small leather goods in a more sustainable way.

That led us to start using plant-based leather alternatives such as cork leather. Staying away from animal leather and plastic has now become a big part of the brand positioning for Blackwood.

By applying the lessons I learned from GoudronBlanc, Oskar and I were able to launch Blackwood with an audience in mind from day one. We knew what that audience wanted and what they valued, and we used that to position our products for immediate success.

If there’s only one thing you remember, it’s this:

We all fall in love with our product and business ideas. It’s the passion that will drive your business. But make sure that you have defined a clear proposition. Make sure there’s a reason for your product or service to exist.

Who are the people who are going to benefit from its existence? You must be able to identify them, reach out to them, and maintain a constant feedback loop to make sure that your proposition is creating value for them.

When Oskar and I started Blackwood, we didn’t have product in mind. We developed our vision based on what the market was telling us. It was by following the steps laid out in The Value Mix and by talking to actual, potential customers that we formed a point of view that ultimately led to creating Blackwood.

Blackwood is off to a faster start than GoudronBlanc because of the work we put in at the start to make sure we knew our audience. We also see that through the queries we get from bloggers.

GoudronBlanc is doing well, too. Taking the time to identify our target audience was the right call. We’ve now served thousands of customers in Europe, but also many in North and South America who respond well to our message.

The next time you launch a product or brand, start with the audience, not the thing itself.