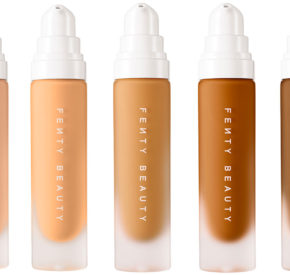 How does a new company stand out in an extremely competitive $532 billion market? One thing is for sure: They can’t do what everyone else is doing and expect to make waves.

Rihanna-backed cosmetics company Fenty was not afraid to break out and go its own way when it launched in late 2017. And Fenty was an instant smash hit because they excelled at doing what other beauty brands have been struggling with for years: connecting with real people.

And thanks in large part to that connection, in its first 40 days, Fenty did $100 million in sales.

Now, obviously some Fenty’s success has to be attributed to the power and popularity of Rihanna as well as the brand’s parent company, luxury goods conglomerate LVMH (which owns Louis Vuitton, Fendi, Christian Dior, Moët & Chandon, and many, many others). LVHM also owns Sephora, which is most notable here because its stores have stocked Fenty from launch. However, not every beauty launch with a celebrity face and big-name partners goes as well as Fenty’s has from the jump. For instance, Drew Barrymore’s Flower Beauty, which rolled out in Walmarts eight years ago and was picked up at Ulta in 2018, and is reportedly generating $50 million in revenue per year after nearly a decade of sales. Fenty did double that revenue in basically a month.

Fenty found next-level success because it positioned itself from day one as a diverse brand for a diverse customer base. They’ve built products for a huge and underserved market—women whose skin tones don’t fall into the ranges that the major makeup brands focus on. They’ve backed up their dedication to that base in their marketing, and they’ve used social media to connect with their customers in unfiltered and organic ways.

What has set Fenty apart is their desire to serve their customer base unabashedly, something they’ve done since first launching. Everything they do is inclusive of and geared toward segments of consumers that legacy beauty have brands ignored, and they do it in a way that feels authentic at every step.

Many early customers jumped on the bandwagon because Fenty was one of the few companies making affordable shades of makeup for a wide range of skin tones—a move that would prove extremely savvy on their end.

Fenty launched with 40 different shades of foundation, encompassing a huge number of skin tones. As a result, the company was able to offer a greater number of choices in darker and lighter shades of makeup than most other major companies. If a consumer wanted to match the lightest or darkest skin tone prior to Fenty’s launch, they could only look at smaller niche brands or turn to one of the few expensive brands that had an extended range. Fenty was now a major, mainstream brand with those shades—and positioned as a high-end brand at that.

But while Fenty is priced as a luxury brand, they still aren’t as costly as many of the other brands selling a large number of shades. Estée Lauder’s foundation range with 42 shades, for example, is priced at $42; Fenty’s foundation is $35. By slightly undercutting the high-end price point, offering an extended shade range for both dark and light shades, and launching in brick and mortar stores, Fenty created the perfect storm for people to find their perfectly matched foundation.

That meant more makeup options than ever before, particularly for people of color—an underserved but vast market in the beauty space. Despite a lack of widely available makeup appropriate for darker skin shades at Fenty’s price point, African Americans made up 85 percent of all beauty sales in the ﻿U.S. in 2017﻿. While some smaller brands catered to a range of dark tones and undertones, there were few options available in the top retail stores or from major brands.

This smart positioning helped Fenty’s sales skyrocket. After Fenty launched, their deep shades sold out across the country, and consumers took to social media to share their joy at finding foundations that matched their skin tone.

Launching with 40 shades right off the bat staked out the brand’s commitment to serving every potential makeup consumer. Finding and catering to these undervalued and underserved customers is a big way that companies can not only make money and grow, but also differentiate themselves from competitors and begin to build brand loyalty.

Consumers are looking to buy from brands whose values align with their own, now more than ever before, but few shoppers are going out of their way to read brand manifestos. The best way to get your core brand values across is to market them, and that’s exactly what Fenty has done since their 2017 launch.

This focus on diversity has continued since the launch in a way that feels organic and unforced. Rather than adding a model of color to their materials after years of using white models, they started off using models of all skin tones and never stopped. Their website always features multiple models to get across that their products are made for, and look good on, everyone.

These marketing images are a nonverbal way for Fenty to reiterate its commitment to diversity; they don’t just talk about serving people of all skin tones, they put images of them front and center. Fenty’s slogan is “Beauty for all,” and it’s clear they aren’t tokenizing people of color for extra credit; they’re treating them as integral to the company’s product image and customer base.

For consumers today, especially young consumers, diversity is a key value they ﻿want to see﻿ in marketing materials—and they’re willing to spend on a brand that reflects their values. (They’re also willing to ﻿boycott ﻿a brand if it doesn’t.) Making your brand values front and center, as Fenty has done, is a great way to connect with consumers and build a lasting relationship.

Use social media the way your customers do

The hype around Fenty’s initial launch and subsequent product launches is partially thanks to their strategic use of social media—consciously using it to cultivate a raw, more personal connection with Fenty fans and customers.

A perfect example of this is an Instagram video promoting Fenty’s Body Lava launch in March 2018. It features Rihanna applying the product, but it isn’t anything like a polished campaign video you might expect to see from a major celebrity with one of the hottest companies in the cosmetics industry. Rihanna pauses and makes sure the camera is recording at the beginning of the video. The lighting is far below professional quality, and the video quality is mediocre as well. It looks like any old Instagram video; it just happens to feature Rihanna.

Rather than coming off as unprofessional, this video is a very deliberate choice. It welcomes customers and shows that anyone can use Fenty’s products, and look good doing so, even if they aren’t on a professional modeling shoot. It meets customers where they are because it feels more like user-generated content than branded content.

The style videos Fenty promotes on their website hit those same notes. They’re the type of “get the look” tutorial videos and vlogs uploaded to YouTube every day—but sometimes, these just so happen to feature a major beauty influencer like Jackie Aina or Rihanna herself.

On their other social platforms, Fenty speaks the language of their consumers. The company loves to put memes on Twitter and jump onto social trends. Since their target demographic is young, this media plays well with their consumers. And not being afraid to jump on a pop-culture moment gives Fenty a noncorporate feel; at times, their Shorty Award-nominated social presence is more like a friend’s account than a brand’s.

A 2014 study by the Kelley School of Business concluded that , “The second generation of internet-based applications enhances marketing efforts by allowing firms to implement innovative forms of communication and co-create content with their customers.” That’s exactly what Fenty has done with their brand presence online.

Not every brand can take Fenty’s approach to social media, and that’s the point: You have to connect with your customers, reach them where they live, use their humor, tell them the story that they want to hear. Fenty is targeting people who live and breathe online and want to feel as though brands align with their values and lifestyles. By engaging customers on social and saying loud and clear, “We’re one of you and we understand what’s important to you,” Fenty is affecting how their consumers perceive the ﻿consumer-brand relationship﻿. In turn, this keeps their customers happy—and keeps them coming back to buy more products.

Your brand position is one of your biggest assets

When Fenty launched, they weren’t the only company to offer more than 40 shades of foundation and highlighter—but they were one of the first major cosmetics companies to stake out diversity as a central value for their brand in the product offerings and marketing. They also carefully crafted their social presence to speak to every young consumer, not just people who had big money to spend on a cosmetic product. Their brand positioning was so fleshed out and visible from day one that it immediately connected with consumers—to the tune of $100 million in sales in just over a month.

Celebrate undervalued corners of your market. Find out who your competitors aren’t serving, and then make a point to cater to them. But don’t just quietly add in a product or service—celebrate the people you are serving, and make them feel welcomed by your brand.

Market your values loud and clear. If consumers are buying according to their morals, make sure they know what your brand values are. Don’t hide them on a webpage nobody visits; use them to underscore your marketing, your website copy, and everything else that comes from your brand, implicitly and explicitly.

Create content that speaks to your consumers. For Fenty, it’s authentic product videos that almost feel like user-generated content and Twitter memes that connect them with their consumers. Whatever it is that your customers care about, and however they express themselves, meet them where they are. The more you build a rapport with customers, the more they trust you, and the more they’ll look to you when they’re ready to spend.