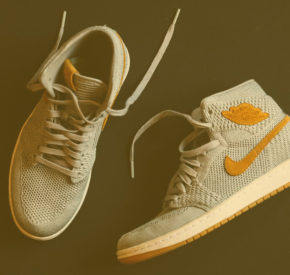 Estimates of the size of the sneaker resale market vary widely, from $500 million to $6 billion, but no matter how you slice it, it’s a gargantuan number. Recently, specialized resale markets that cater to buyers and sellers of sneakers, and other collectible or luxury fashion goods, have begun to emerge.

These sites are standardizing the process and turning an activity that was once relegated to small subcultures of collectors and bargain hunters into big business.

“Search for a shoe on eBay, you’ll get 1,000 results. But then it’s up to you to decide,” explains GOAT vice president of business development and strategy Matt Cohen. “Why is this person selling it for $600 and this person for $800? Why does this person have a picture of a cat sitting in the sneaker? If you go to the New York Stock Exchange and want to buy a share of Nike, there’s one ticker symbol, not thousands. The sneaker resale market is standardizing all of that.”

But that standardization has had some unintended consequences, and it’s changing the way people buy and sell everything from dresses to handbags to watches.

Go back thirty years, before the rise of online commerce, buying anything second-hand meant going to a local consignment or thrift store. You were limited to whatever inventory they happened to have on hand and it was up to you to make sure what you were buying was a genuine article.

eCommerce effectively solved the first problem by connecting buyers and sellers and giving consumers access to a nearly limitless supply of product. But early peer-to-peer platforms like eBay and Craigslist were still something of an unregulated Wild West. New online reseller platforms like Tradesy, Poshmark, StockX, and The RealReal aim to be more than simple intermediaries.

These companies are drastically improving the online consignment shopping experience by injecting trust, safety, and verification into the process. Through a combination of policies and expertise (according to The New Yorker, The RealReal employs “a team of gemologists, horologists, art curators, and brand authenticators,” for example) these latest-generation platforms offer shoppers the same level of confidence in their purchases that they get when buying retail.

Tradesy offers a full refund guarantee if you end up with a knock-off, while Poshmark authenticates anything over $500. StockX acts as a sort of escrow-meets-authentication service where any time money changes hands, their team verifies the items first.

This is a plus for sellers, too. The market for counterfeit goods is estimated at $500 billion annually, and they’re getting harder and harder to spot. Experts say counterfeit goods are about 95 percent accurate. That level of precision means dropping hundreds or thousands of dollars on luxury goods on eBay can be a risky bet. Buyers will naturally gravitate toward established sellers with a large number of positive reviews. That makes it difficult to get started as a seller, and is a huge roadblock to someone just trying to empty out their closet.

The reseller markets take the burden of trust away from the seller by adding a verification layer. That levels the playing field and makes it easier for sellers to sell. Plus, because of the wealth of data in one place, sellers can more easily price their items to move.

In addition to better user experience, these markets grew by taking advantage of a few recent trends:

The resale market is booming, with growth of the apparel market expected to check in at 15 percent year-over-year, reaching $41 billion by 2022. But it’s not all sunny.

The same platforms that have been such a boon to second-hand shoppers, have also introduced new problems. This is most prevalent in the streetwear subculture, where exclusivity and collectability has always been a central part of the lifestyle.

By making the resale of items like sneakers so easy and safe, the items themselves have started to become abstracted. You’re not buying and selling a pair of shoes, you’re buying and selling something more akin to a financial security.

That’s led these sites to operate more like financial markets than a place to connect sellers with people who actually want the product being sold. That probably shouldn’t come as a surprise, given that some of these sites were specifically modeled after stock markets from the outset. Still, many of these platforms are now populated by robots trading with each other or kids who wait in line hours simply so they can resell their purchase later.

And that’s a problem in and of itself. What was once a passion for streetwear or sneakers or watches, is too-often being turned into a side hustle. And for many people, turning your closet into a business might not be too healthy.

For brands, the resale marketplaces may not be all good, either. Luxury companies, especially, worry that marketplace websites are cannibalizing their business and devaluing their brands. Chanel filed a series of lawsuits last year against resale sites, alleging that these marketplaces sometimes let counterfeit goods through while implying some sort of official relationship with the brand.

“On the surface, the [sneaker] secondary market may look like a stock market but it’s more similar to the illegal drug trade,” Josh Luber told Financial Times in 2015, shortly before founding StockX.

He had a point. Sneakerheads, and many collectors of streetwear and luxury goods, often sample their wares. (As FT related: “One to rock, and one to stock.”) In a 2012 NPR report, one person described people queueing up outside a Footlocker waiting for new Jordans to drop as “fiends.”

It’s clear that this culture wasn’t created by the online resale markets, but it has been bolstered by them. By making resale so easy and safe, and by treating items and brands like stocks (The RealReal also puts out regular “state of resale” reports that track value movements of brands on its platform), the sites are encouraging people to view these items as investments rather than fashion.

And that’s detrimental to both the culture and the brands.

On the blog Deadspin, writer Casey Taylor describes a sneaker culture in decline. “The data tends to back up the concept of the suburban and rural kid using this as their new income stream,” reports Taylor. “More than half of those who say they sell on the platforms but don’t buy on them are from rural areas of the country, and nearly 60 percent of them are 24 or younger.”

Taylor says that’s caused a shift in the makeup of the subculture, pushing it further from its roots. “No longer are lineups for individual releases comprised solely or mostly of people who love the product or have bought into the hype. Instead, you’ll have people have no knowledge of what they’re buying, save for the expected profits on their investment,” he writes.

One could argue that a shift from a culture based around conspicuous consumption to one based around luxury goods as securities is a lateral move. But the increased buying and selling activity has pushed brands in a dangerous direction as well.

According to NPR, it’s not just robots and suburban kids treating sneakers like a commodity that’s ruining streetwear and sneaker culture, it’s also saturation. As more people joined the markets, many lured by the prospect of making money flipping products, brands accelerated their release schedules.

“The sneaker brands had gotten to a saturation point because there’s only 52 weeks in the year, and they were already maxing out in terms of every week there’s four, five, sometimes 10 sneaker releases,” StockX’s Luber said.

And lest you think this is only an issue facing the streetwear and sneaker industries, which already served subcultures built around trading, other luxury brands are getting in on the act. A collaboration between Supreme and Louis Vuitton produced a backpack that retailed for $3,900 but resold on StockX for over $9,000.

What that means for brands

Silicon Valley venture capitalists are pouring millions into resale marketplace startups. $288 million in The RealReal, $197 million in GOAT, $153 million in Poshmark, $74 million in Tradesy, $53 million in Rebag, $50 million in StockX, $31 million in WatchMaster, and millions more in dozens of others.

With all that money, it’s likely online resale is here to stay.

Fashion brands, it seems, are starting to come around to that. Chanel’s lawsuits notwithstanding, brands are beginning to figure out how to turn resale into a business opportunity. It’s safe to say Louis Vuitton’s collaboration with Supreme was done with an eye toward the resalability of Supreme’s products. Meanwhile, brands like Louis Vuitton parent LVMH and Kering (owner of Gucci) are reportedly exploring partnerships with The RealReal.

One of the big reasons for brands to get in on the resale trend is data. Gucci has seen a resurgence in popularity among younger shoppers under creative director Alessandro Michele, who took over in 2015. The RealReal saw that resurgence in real-time, and owns a wealth of data on search and buying trends.

“Two years ago, we couldn’t sell Gucci, simply because their former designer wasn’t that good,” Wainwright told Digiday. “Now, the brand is back on top — and it doesn’t even matter that we don’t have that many items from [Michele] in stock.”

Another reason, as described by Tradesy CEO Tracy DiNunzio, is that resale fashion actually spurs more high-end purchases at retail. “When a customer knows she can resell her item, she’s going to be willing to pay a little more for it,” she says. This obviously contradicts the idea that resale cannibalizes retail sales.

So how can brands ready themselves for resale? Three things are obvious: first, introduce scarcity and exclusivity. Second, make your brand appeal to younger shoppers, who are more likely to shop second hand. Finally, make sure the things you sell are built to last—shoppers can’t resell items that fall apart.

Whether resale marketplaces are a net positive for shoppers and brands is a bit murky. They keep products in circulation longer and for many items, offer a lower priced entry point for consumers to access luxury goods. They make buying and selling high end goods on consignment easier and safer, and have vastly improved the user experience of buying second hand.

On the other hand, they turn some items into something like tradable financial instruments, which has hastened the decline of certain fashion subcultures and encouraged brands to over saturate the market with new products. Luxury brands also worry that wide availability of lower-priced, second hand goods might ultimately hurt retail sales.

Regardless, resale markets are here to stay. They’re well-capitalized, growing quickly, and extremely popular with consumers.

For that reason, it will be more productive in the long run for brands to engage with resale markets, rather than shun them. Brands seems to be coming to that conclusion. The RealReal’s Wainwright said last year she’d met with many top fashion brands, pitching them on the idea that resale marketplaces were “the gateway drug to [luxury] brands.”

Taking it a step further, it wouldn’t be surprising to see some brands launch resale marketplaces of their own, allowing them to fully control authentication and keep money flowing to their coffers. On the other end of the spectrum, fast fashion brand ASOS has operated a marketplace since 2010. On it, boutiques resell not just ASOS items, but other second hand and vintage clothing, providing ASOS with a wealth of consumer data that can inform their product development.

It’s the data that makes marketplaces so powerful for brands and why, ultimately, online resale in changing how we conduct online retail.