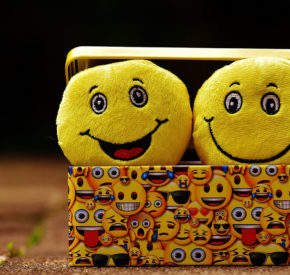 There was a time when emojis were everything. And that time was… two to four years ago.

Emojis started in Japan in the late ‘90s, but they didn’t catch on worldwide until the mid 2010s. But once they arrived, they arrived in a big way–and brands immediately jumped on the opportunity to leverage their massive, trendy appeal.

By 2016, one out of every 20 marketing emails had an emoji in the subject lines. It wasn’t all hearts and smiley faces either–brands used 1,500 different emojis in their subject lines that year.

And that strategy worked. 60 percent of the time using emojis in the subject line led to a spike in email open rates, and they increased click-thru rates by 93 percent.

But even as emojis took over the world, there was always some pushback bubbling up. A survey from 2015 found 30 percent of people were already sick of seeing emojis in emails. By fall of 2016, the majority of people across all age groups felt it was time for brands to “cool it with the emojis.”

And then, in 2017, The Emoji Movie came out… and was universally hated. Emojis had seemingly hit the inflection point when they weren’t the “cool new thing” anymore–they had made the transition to a normal part of the everyday lexicon.

With that, emojis stopped being such a magic bullet for email marketing.

A more recent study found emails with emojis in subject lines had open rates of 26.8 percent, while subject lines without them hit 38.5 percent. Yes, including emojis is now a detriment, not a benefit. So brands started playing it safer (and getting more repetitive) with their emoji usage.

But mainly, it seems they’ve gone toward using no emojis at all. I subscribe to hundreds of email newsletters for research purposes and here’s what my inbox looks like right now. Just two emojis on the entire screen.

This does not, however, mean emojis are dead. The fact that they’re not ubiquitous in email subject lines anymore is an opportunity. With less emoji competition in the inbox, you now have an even better chance to stand out. But–you have to use them sparingly and cleverly to achieve that effect.

Here are five tips for getting the maximum value from emojis in your email marketing subject lines in our new post-emoji fad reality.

1. Use emojis sparingly and vary them up.

If you want your emoji usage to stand out, one big key is: Don’t use them in every email. A study by Return Path backed that up (PDF); they found the novelty factor of emojis was the key, so you shouldn’t overdo it.

Of course, some brands still do. Old Navy uses an emoji in virtually every email subject line (but at least they’re varying the ones they choose).

Here’s a more selective approach by Writers Store. They use an emoji in one out of 10 emails or so, whenever they need a little extra impact for a key sale or event. That’s a disciplined approach, and subscribers won’t get the subconscious impression that Writers Store is needy or constantly shouting for attention. So when they do use an emoji, it’s noticeable.

It’s also a good idea to use different emojis than everyone else–especially your competitors.

I subscribe to emails from 17 different coffee brands (I may have a problem) and Death Wish Coffee Company is the only one using a black heart emoji in its subject lines.

I also subscribe to emails from four different organic and health food brands (apparently I prioritize coffee at least four times more than I prioritize eating well), and Thrive Market is the only one using a crystal ball emoji in its marketing emails.

2. Use emojis to supplement, not replace, words.

It’s tempting to replace words with emojis. It could add a little flavor to your subject lines, and maybe even save you some characters to keep your subject lines tighter. But there are two big reasons not to employ that technique.

One, not every email client, browser, and operating system is going to be able to display every emoji. Your customers will run the gamut, from using Gmail on the most recent iPhone running the most recent iOS, to using an AOL email address on a Compaq running Windows ME. (I am assuming my parents are subscribers to your email list in the latter situation.)

And two, even if the emojis do display properly, many emojis look very different depending on the platform.

Here’s the drooling face emoji on Apple and Android. (And by the way, there isn’t even a drool option on Gmail’s built-in set of emojis.)

Same deal with the “person frowning” emoji. Apple’s looks sad, Google’s looks clinically depressed, and Samsung’s has moved on to a different stage of grief and is ready to exact murderous revenge.

So instead of using emojis to replace your words, use them to enhance your words. In both of these cases below, the emojis send a clear, strong message that complements the subject line.

And Banana Republic Factory throws in a pair of shopping bags to make it clear you’ll be able to stock up on lots of stuff with their after-Christmas clearance sale.

3. Pick the right emojis for your brand.

In a study of open rates for emojis in subject lines, the emoji that performed the best was… the poop. So that emoji is clearly effective–but probably not right for most brands. Unless you’re in the manure business, in which case, get ready to start printing money.

Since emojis can be a sign of a brand trying too hard to be cool or appeal to younger people, make sure you pick the right emojis for the vibe your brand gives off. That way you can avoid winding up getting hit with a Fellow Kids meme.

Yes, we see the irony of deriding brands for trying to hard with emojis when we just pulled out that meme.

But really, not every brand is a good match with emojis. Anyone remember this Goldman Sachs tweet?

Or this Chevy press release?

4. Use emojis to convey an emotion.

With that knowledge, you can utilize emojis to convey an emotion or a tone.

Pro Wrestling Tees uses a shocked emoji to convey the feeling over just 10 of their crates left. (And it is shocking, I mean, right there at the beginning of Road to WrestleMania season.)

Forever 21 uses a wink and smile to establish a friendly, personal rapport with the customer reading their subject line.

5. Use an emoji to make a good subject line better.

So if you know you’ve written the perfect subject line, throwing in an emoji can somehow make it even more perfect.

Fresh Brewed Tees presents an intriguing offer (“Tag+Like=$200?!?!”) and then enhances it with a little context and visual stimulation of the heart, bag of money, and Christmas tree emojis.

Anthropologie promotes a line of yellow clothes with a brief but effective subject line (“The color of happy”) followed by three warm, yellow emojis.

But if your subject line feels spammy or generic, an emoji is going to make it feel even spammier or more generic.

Here are five recent emails from one company using emojis on so-so subject lines. None of these emojis makes me want to click. They just look like they’re trying too hard to get my attention for spammy-sounding offers.

Even if emojis aren’t as trendy as they were a few years ago, you don’t need to completely banish them from your subject lines. As emojis become less ubiquitous in email marketing, it’s actually an opportunity–you can get more value out of them since they’ll stand out.

But to get that value, you have to use them in an appropriate way.

As always, it’s important to test and monitor your results. Start by sending a few emails with emojis in the subject lines. Make sure they work in different browsers, email clients, and operating systems before you send; then monitor their open rates to see if they have a positive or negative effect for your particular brand and audience.

And remember: emojis are just one of the tools at your disposal to help you write great subject lines. 😉