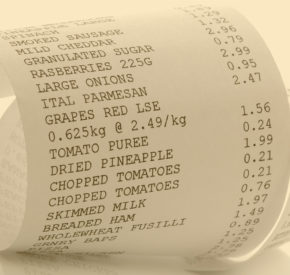 Receipts are how some of the best eCommerce companies drive upsells and repeat purchases. Through simple nudges to customer behavior, companies have figured out how to turn a receipt from the end of a transaction into the beginning of a new one.

Using a receipt email as a marketing tool gives companies the ability to extend the customer experience after a purchase has been made and reinforce the journey customers took to make their purchase. If you ignore this, you’re missing out on an important opportunity to delight your customer, at precisely the time they’ve already made a commitment to your brand.

Let’s take a look at how eCommerce receipt emails got their start and how the shift from routine business transactions to personalized interactions gave companies a way to better connect with their customers.

Before 2005: Receipts as routine business transactions

Receipts have been around for almost as long as human beings have been writing. Thousands of years ago, the Sumerians pressed reeds into clay to create cuneiform tablets that accounted for the sale of sheep, wood, clothing, etc. These tablets, once thought to contain poetry or correspondence between cities, may actually be the world’s first receipts. Tracking business transactions became one of the most prevalent forms of written communication throughout history.

Skipping a few thousand years—medieval merchants would use receipts instead of carrying gold to facilitate longer and safer travel. After Johannes Gutenberg invented the printing press, he started creating receipt books and ledgers that could easily be filled in with handwritten receipts.

The receipt has played a major role in how human beings interact with one another. In 1890, the paper receipt as we know it was created by the National Cash Register Company (today, a multi-billion dollar, publicly traded company), ushering in the next 100 years of transaction receipts.

As receipts continued to evolve, businesses started adding more and more information to the transaction information already included. Store owners began to realize that receipts were a guaranteed touch point with every customer, so they began to think of them as opportunities for marketing and brand building. Small bits of personalization, like a customer’s name (taken from their credit card) or the name of a restaurant server, started to appear on receipts. More recently, stores have added thank you messages, loyalty programs, surveys, coupons, and statements of savings.

Receipts started to get comically long as a result. Some even break the two-foot mark, regardless of the number of products purchased during a transaction.

Paper receipts take us up to the 1960s, when businesses started seeing the added value of using computers to track their business transactions. This led to two concepts—the Electronic Data Interchange (EDI) and Electronic Funds Transfer (EFT)—that laid the groundwork for how business would move their routine business-transaction tracking from paper to computers.

These two concepts, along with the 1978 Electronic Fund Transfer Act and the invention of the internet, informed the impending shift that took business transactions online.

With the start of eCommerce companies like Amazon and eBay, emailed receipts became more and more popular during the mid-1990s to the early-2000s. This brought new regulations, such as those described in “Electronic Commerce: Formal Requirements in Commercial Transactions,” published in the United Kingdom 2001, which defined how online business transactions would be handled.

That was followed by the Electronic Commerce Regulations 2002, which incorporated an earlier EU directive into U.K. law and required email receipts for online transactions. (In the U.S., there is no such requirement to provide transaction receipts, though some states do require some form of proof of purchase to be offered to customers. There are federal laws governing what information you’re allowed to include on receipts, though.)

This meant that eCommerce businesses needed to translate their receipts into emails in a way that was easily understandable for the customer.

The early 2000s saw more and more eCommerce businesses sprouting up. The growing popularity of successful eCommerce brands signaled a shift in how customers made their purchases for the entire market. By 2005, even many retail providers were starting to offer the option for an emailed receipt instead of a paper one.

Popular eCommerce providers like Shopify promote the value-adding ability of receipts for all of their customers:

“Email receipts were once only utilized by eCommerce stores to send online shoppers a record of the transaction and way to track their package. What was originally just a necessity for eCommerce merchants has now spread to offline sales channels as well. Recently there’s been a movement for both online and brick-and-mortar retailers to send email receipts to their customers.”

This gave companies a way to save on the cost of paper receipts, as well as engage with their customers more easily.

While there was still some concern over the safety of buying items online in 2004, those worries were slowly being offset by growing technological and security improvements. Some people would choose to print their emailed receipts for safer record-keeping. This indicates that although email receipts were gaining popularity, they were still not trusted as much as paper receipts as a record of the transaction.

By 2008, that perception had largely gone away, and businesses were starting to realize the potential of eCommerce receipt emails as a part of the broader customer experience and lifecycle email marketing journey.

With companies thinking about how email receipts factor into the shopping experience, a new shift begins to take place. Online stores start to focus on making receipts more valuable to both the customer and the business. This means that eCommerce companies start moving away from thinking about receipts as a straightforward record of transaction and moving toward seeing the receipt as a marketing tool. This is similar to the shift that brick and mortar stores had earlier made with their receipts, when they began to include things like their logo, brand messaging, and loyalty program information on receipts.

By 2010, companies like Amazon were including information about the customer, their purchasing information, a summary of the order, and shipping details.

These receipts gave the customer a significantly more information than before while also providing them with a way to keep track of their purchases effectively. They also included related upsells (see the “Amazon.com Rewards Visa Card” offer in the above screenshot) and pertinent information, such as how to manage the order online. While on in their infancy in 2010, we’ll see the trend to add value and nudge customers toward additional purchases really mature in the next section.

Online transactions also began to be seen as a way to reduce environmental waste around this time. A study published in the 2010 IEEE Systems and Information Engineering Design Symposium found that 80 percent of the U.S. population receives at least one receipt each day. 11 percent of those are immediately thrown in the trash:

“With America’s retailers generating approximately 228.7 million pounds of receipt paper per year, this translates to 22.87 million pounds of paper that instantly become trash. Further, the current system does not make receipts readily accessible to merchants and consumers when they need them.”

Emailed eCommerce receipts couldn’t cause waste, even if they were trashed without ever being looked at, and they could be retrieved later or resent by a merchant without having to generate more paper waste.

Changing customer and company perceptions pushed receipts further from their roots as a transaction history and toward something that would provide value to the customer. The aughts gave eCommerce receipt emails more ability to provide information to the customer while setting the stage for another evolution in the customer experience.

By the early 2010s, providing value through connection was the name of the game. Email receipts had become an integral part of the customer experience and were evolving into a tool to help companies make more personal connections with their customers.

In a 2014 talk to the National Retail Federation, Jack Dorsey, the CEO of Square, called the receipt an untapped publishing medium:

“What if we see the receipt more as a publishing medium — a product unto itself that people actually want to take home, that they want to engage with, be fully interactive with? What can we do with this everyday tool? What can we build into this canvas that’s actually valuable, that’s independent of the product you just sold? What can you give in this communication channel, this publishing medium, that people want to engage with?”

Companies are now thinking about how to elevate the receipt email into something that their customers actually want to open and interact with. Take this example from eCommerce company Gilt:

The function of this email differs significantly from the 2010 Amazon example. While the important transaction, product, and shipping information is included, it is not the sole focus. Customers are met with an upsell immediately—the offer of Free shipping on all orders within one hour—along with an opportunity to receive a coupon for sharing their Gilt purchase on social media. The Amazon email also included an upsell—the credit card offer—but Gilt’s taken it to another level, by making the upsell more of a focus, making it more relevant to the purchase, and making it stand out with eye-catching visuals.

The right-hand sidebar recommends additional products the customer might want to buy. These are all included to not only give the customer an opportunity to make additional purchases, but also show them that Gilt has been paying attention to their browsing history.

Today, receipts are typically constructed in such a way to highlight the relationship with the brand first, followed by the transactional information.

While both email receipts above include all of the information included on a traditional paper receipt, the first thing a customer sees upon opening each is not the transaction information. They’re provided with immediate value on top of what they ordered and then can scroll to find their specific order information.

It’s important to note that while these eCommerce receipt emails have evolved considerably over the past 20 years, they still share characteristics with traditional paper receipts. They even seem to follow a similar pattern—growing longer as companies start to include additional upsells, discounts, loyalty programs, and thank you’s alonside the transaction information.

Using receipt emails to your advantage

Receipts perform a very important function—they stand as an easily referenced record of business transactions. For eCommerce providers, receipts can also be a way to offer additional upsells, connect with the customer, and build a stronger relationship.

Don’t think about your receipts simply as proof of payment; they’re a way to enhance the customer experience and help your company grow.