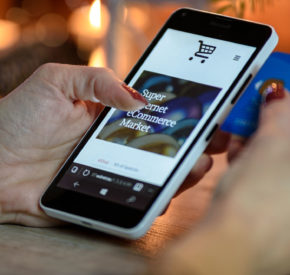 In 2016, Gallup found that just 24 percent of survey respondents claimed to make most of their purchases with cash, which was down 12 percent from the same study administered in 2011. It’s not just cash that’s disappearing though—73 percent of millennials told a leading credit card company that they believed they would be able to make all payments with mobile devices and digital wallets by 2030, rendering physical cards useless.

Smartphones have already become a common method for browsing online stores, but convincing people to complete purchases on their phones remains a major hurdle. Over the last four years, mobile eCommerce traffic has skyrocketed. Monetate’s Q2 2018 Ecommerce Quarterly found that 52.28 percent of traffic in the U.S. is on smartphones, but that traffic converts at a mere 1.61 percent, compared to average desktop and laptop conversions rates of 3.91 percent.

This is mostly because of the checkout process. Entering credit card information on a small mobile device screen is inconvenient and time-consuming, so consumers often choose to research products on their phones and return to the site later on a computer.

One way to boost these low mobile conversion rates might be digital wallets. eCommerce companies see a direct correlation between offering digital wallet options and an increase in mobile sales.

Here’s where things get a bit tricky: as technology progresses more rapidly than many of us can keep up with, the terminology sometimes becomes muddled. There is some confusion on how payment gateways and processors differ from digital wallets.

Both payment gateways and processors are required to run an eCommerce business. Each work to provide merchants with a way to accept payments. A payment gateway acts as the portal between a vendor and a buyer’s financial institution. Payment processors are the service which communicates between buyer, merchant, the buyer’s bank, and the merchant’s bank.

A digital wallet, on the other hand, is a method of payment. These services securely store user data and allow consumers to make purchases on eCommerce sites more quickly by automatically transmitting the protected information without requiring the buyer to enter the information manually. Some of the most common digital wallets used in the U.S. include PayPal, Apple Pay, and Google Pay.

The advantage of digital wallets

As more people gravitate toward mobile shopping, some predict digital wallets will become the gold standard of payment methods. Digital wallets offer a lot of advantages over traditional methods of payment on mobile for both store owners and consumers.

Every year, the number of people shopping on their smartphones multiplies. Following Cyber Monday 2018, Adobe Analytics found that mobile shopping was at an all-time high, with sales reaching a record-breaking $2.1 billion and 51.4 percent of traffic originating from mobile devices (7.7 percent of which was from tablets).

Yet even as mobile traffic and revenue have increased, the Monetate Ecommerce Quarterly numbers referenced earlier reveal a concerning divide between mobile site visits and completed transactions. As good as Cyber Monday was this year for mobile shopping, it clearly could have been a lot better if conversions rates on mobile approached those on desktop.

Digital wallets may be part of bridging that divide between mobile visits and checkouts. BigCommerce found that when stores their platform added a digital wallet payment option, the average conversion rate tripled—which makes sense. Think about the last time you shopped on your phone. Maybe were in bed or squeezed next to a stranger on the subway. In either case, do you really want to pull out your wallet, find the right credit card, and then manually enter a long string of numbers and other sensitive data? Probably not.

We’ve become so accustomed to all the ways technology makes our daily lives quick and easy, that entering credit card details on a small touch screen feels overly cumbersome. But when a purchase takes just a single click, shoppers are much more likely to hit the checkout button the minute they discover a product they love.

A study conducted by Baymard Institute found that 17 percent of eCommerce shoppers will leave a site without purchasing because of concerns with the site’s security. But, consumers are becoming increasingly comfortable with digital wallet services, especially those hosted by third-party sources that they have used before and trust (think Paypal, Apple Pay, and Google Pay). Offering these alternative payment methods not only expedites the checkout process but also eases the security concerns of shoppers who have just found your site for the first time. Credibility and familiarity are key, and Apple, PayPal, and Google have all cultivated reputable names for themselves.

Digital wallets can also mitigate some of your security burden as a merchant. Because users are not entering their payment information directly into your eCommerce site, responsibility for safeguarding the data falls on the digital wallet service provider instead of on you. Virtually every digital wallet satisfies the guidelines for SAQ A, guaranteeing users the highest level of security required by PCI compliance protocols. Essentially, digital wallets act like a poker chip, supplying the payment gateway with a token instead of actual money and information, which the gateway can swap for payment details.

Much like the experience of shopping in a brick-and-mortar store, exploring an eCommerce site should be easy and aesthetically pleasing to users. Shop owners want their stores to be organized and well-staffed for a quick checkout experience; eCommerce merchants should aim for the same standards with attractive web design and simple navigation features.

When a digital wallet payment option is added to the mix, users experience less friction at checkout—they simply select their choice of digital wallet and, voila, the purchase has been made in less than half the time it would’ve taken to enter all the necessary payment data.

Both mobile and traditional device shoppers prefer sites with fast checkouts. That Baymard Institute study also found that 28 percent of shoppers abandon their shopping carts if checkout is too long or complex. When consumers are asked to fill out several pages of information before a purchase, they’re more likely to abandon the items. The top 30 best performing eCommerce sites in PYMNTS Checkout Conversion Index for the month of November 2018 all feature a shorter-than-normal checkout process. These sites carry shoppers through checkout 15 percent quicker by ridding 10 percent of the typical number of clicks.

There’s a real link between performance and user experience. Digital wallets can greatly reduce the number of checkout steps for customers on mobile because all the necessary information is already stored.

The most basic function of every digital wallet is to securely store financial information, such as credit card numbers and bank account details, so shoppers can use this data to make purchases quickly. As digital wallets gain popularity among mobile users, many options have emerged, each with its own set of options and restrictions.

Certain digital wallets are only available to users on specific platforms. Samsung Pay and Apple Pay are two popular wallet services that can only be accessed through Samsung or Apple devices, respectively. Shoppers can use Mastercard’s Masterpass and Visa Checkout across different platforms, but they’re restricted to storing only cards provided by the respective payment network. Other digital platforms, such as Google Pay and PayPal, are available across devices to anyone with a Google or PayPal account.

While some digital wallets are available worldwide, PayPal and Apple Pay being two of the most widely used options, other services are location specific. Alipay and WeChat Pay are popular digital wallets in China, PayUMoney and PayTM have taken hold in India, and Klarna is commonly used in the U.K, Denmark, and Sweden, for example.

As digital wallets gain widespread adoption, services have begun adding extras to stand out from the competition. PayPal is the wallet that has perhaps undergone the most dramatic featue expansion. It now acts more like a bank than a stand-alone digital wallet, allowing users the option to pay from their PayPal balance, rather than directly from their bank account or with a stored credit card. Since acquiring Venmo, PayPal has also become even more known for peer-to-peer transactions, enabling people to send and receive money directly to each other via their mobile devices.

Other wallets, like Samsung Pay or Apple Pay, are innovating and competing with deep integrations with various point-of-sale systems.

Choosing the right digital wallet for your store

Which digital wallet is right for your eCommerce store? There are a number of questions you should ask about your users and your business to make that determination.

Remember: this isn’t a zero sum game. You can offer more than one digital wallet if you feel that your customer base may utilize more than one payment option.

Regardless of which service works best for your business, digital wallets present merchants with an opportunity to provide easier checkouts for consumers and potentially boost those struggling mobile conversion rates. When shoppers can simply press one button to complete an order, there’s much less friction during the transaction and you’ll see your mobile conversions go up and abandoned carts go down.