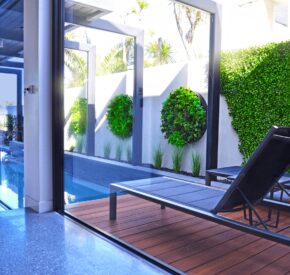 Designer Plants is an artificial greenery business based out of Victoria, Australia, providing high-quality, lifelike, and sustainable artificial plants to more than 11,000 spaces around the country.

They have a showroom location as well as a WooCommerce store that serves both customers and wholesalers.

As Designer Plants’ business grew, their site started to become “heavier,” according to Ray Pastoors, marketing lead. The site now had more products for sale and plugin bloat, which was resulting in a less-than-ideal customer experience and fewer conversions.

Many of those excess plugins were necessary because of the limitations of their email platform. Designer Plants knew email was their best channel to reach their customers, and they were using Mailchimp in their attempts to do so. However, they found it required workarounds and add-ons to accomplish even basic tasks. Because Mailchimp isn’t built specifically to address the needs of eCommerce stores like theirs, they needed to use third-party plugins to accomplish many of their customer communication goals.

Designer Plants serves a number of different customer cohorts (individuals, business, and wholesalers), all of whom require a different email strategy. But Ray found it difficult (if not impossible) to send them segmented and personalized emails in Mailchimp, even with more workarounds and complex tagging—which meant their emails weren’t reaching the right people at the right times.

Jilt checked both of those boxes for Designer Plants.

The process of migrating from Mailchimp to Jilt and learning the new platform was smooth for Ray and his team—in large part thanks to Jilt’s support team, which Ray says is, “second to none.” He was also happy with the personal care at Jilt compared to his previous experience. “They are also more friendly and willing to improve their product to meet your needs,” he says, “Compared to larger providers who don’t care nor bother to make you part of this.”

Once fully migrated into Jilt, Designer Plants began setting up automated emails; thanks to Jilt’s native integration and syncing with WooCommerce, as well as the library of pre-built automations available, they were able to set up targeted, automated email campaigns in a matter of clicks.

Designer Plants started with abandoned cart emails—which they wanted to segment by user group, product, and cart value. Ray says, “Thanks to Jilt’s segmenting rules we could exclude wholesale customers from this, and target messages based on the type of products people purchased. For instance, we have a different communication for those who abandon a green wall (higher value item) in comparison to artificial plants or stems (lower value item). The journey has proven very effective for us, because we lead with key messages that push the consumer to consider their purchase decision, often without needing to introduce a discount.”

Once they had all of those automations up and running, they began using Jilt to handle their transactional emails, like receipts and shipping reminders, as well. Ray says they were happy Jilt offered customizable transactional emails because “this meant that our emails looked consistent and were easy to track, creating one overall profile for the customer in Jilt’s tools.”

All of the above addressed Designer Plants’ first need: reaching the right customers at the right times with the right emails. As for their second goal, Designer Plants quickly took full advantage of the “little things” built into Jilt to pare down the plugins they were using on their site.

The first was Jilt’s add-to-cart pop-up, which gives customers the chance to enter their email when they add an item to the cart. Ray says, “This helps to improve the chance we achieve a sale if the customer abandons”—after all, you can’t send a cart abandonment email without an email address. The result: abandoned cart emails sent and recovery numbers greatly improved year-over-year.

Another feature built into Jilt that helped Designer Plants was the ability to automatically generate one-time, personalized discount codes for customers. Ray says, “Typically, to deliver an online gift voucher experience you need a plugin for WooCommerce. Thanks to Jilt’s tools we did not need that, as we could create a segment based on a particular product and send off a more personalised email for people to use as their gift voucher.”

“Jilt has been able to deliver greater revenue and results for our marketing efforts,” says Ray.

The number speak for themselves:

As Ray sums it up, “The powerful segmentation features of Jilt allow us to reach more of our customers, drive customer lifetime value and increase our revenue by being able to capture more abandoned carts than before. Mixed in with other marketing activities, Jilt has proven to be a great resource for us.”