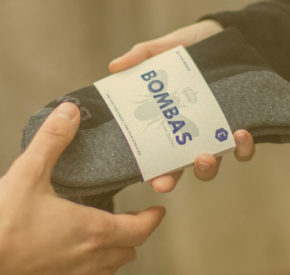 When Randy Goldberg and David Heath heard that socks were the number one requested item in homeless shelters, they had an idea: What if they could start a company that brought awareness to this issue and elevated socks from a fashion commodity to a fashion statement with a mission?

To meet their ambition, Goldberg and Heath founded Bombas, an eCommerce apparel company that uses the one-for-one business model made famous by TOMS Shoes. Buy a pair of socks for yourself, and Bombas donates a pair to someone in need via their community partners.

They recognized that their cause could have a real impact on issue of homelessness by creating a product that met one of the most basic and important needs of that community. As Heath told Glamour, “When we first started, I stopped to hand a man on the street a pair of socks, and he proceeded to take off his shoes and show me the make-shift socks he was wearing made out of plastic shopping bags and to tell me how crucial a fresh pair of socks were to him. It never ceases to amaze me the big difference we can make, with just a pair of socks.”

Once they found their cause, Goldberg and Heath began working to create a product that people felt good about buying.  They fostered a company culture of shared values and found ways to build the mission of giving back into everything they did. Since 2013, Bombas has donated more than 9 million pairs of socks and worked with 1,200 partners to spread awareness of their cause.

This focus on social issues helped Bombas connect with their customers and solidified their place as a mission-based eCommerce brand. They’ve taken these values and transformed them into a $50 million business.

Find a cause that helps people impact their community

Mission-based marketing is dependent on a cause that helps customers feel like they’re making a real impact. For Goldberg and Heath that cause was homelessness. After hearing that socks were the number one most requested item in homeless shelters, the pair decided to do something neither had considered before: start a sock company that helps donate to homeless shelters around the U.S.

In order to make an impact, Goldberg and Heath knew they’d have to donate a lot of socks. And to do that, they had to make a product that people would keep coming back to. The mission, they figured, won’t matter if the product is crap.

The sock market hadn’t really seen innovation in decades, so it offered a perfect opportunity for Bombas to stand out by creating a better product. “We spent over two years on research and development, to improve upon everything about the commoditized product—from the toe seam and the materials used, to arch support and the way the sock wore and washed,” cofounder and CEO, Heath told Forbes.

Interestingly, the socks Bombas sells to the general public, are not the same ones they donate. Their R&D efforts led them to create an entirely different sock for donation, one that specifically meets the needs of people who don’t have the privilege of washing their socks every day. The Bombas donation sock has features like an anti-microbial treatment and reinforced seams, designed in partnership with their giving partners.

Once they had their sock tech figured out, Bombas still had to answer the question of whether socks for the homeless would be a mission that resonates with consumers the way glasses (Warby Parker) or shoes (TOMS) have been. They turned to crowdfunding to find out. Their successful Indiegogo campaign in 2013 provided the answer: a resounding “yes.” Via that campaign alone, Bombas used their one-to-one giving model to donate more than 25,000 pairs of socks to homeless shelters around the United States. They went on to make an appearance on Shark Tank, winning an investment from Daymond John, who put $200,000 into the company for 17.5 percent equity.

After confirming that they had the community to support their cause, Bombas doubled down on their efforts. There are over half a million homeless people in the United States, with most states reporting that their shelters are at capacity for the majority of the year. Bombas works with over 1200 partners in every state through their donation programs.

While the majority of homeless men, women, and children are living in or around metropolitan areas, working with partners across the U.S. gives Bombas a way to make an impact country-wide. That means their customers can purchase a pair of socks, knowing that it will have an effect locally no matter where they live.

Bombas built their community by first finding a cause that they were passionate about. From there they were able to create a product that met the needs of the homeless community and turn it into a viable business plan. A successful crowdfunding campaign and media coverage from Shark Tank helped amplify their message of social impact through one-for-one donation.

Create an experience where customers feel good about their purchase

Basing your business model on philanthropy is a great way to garner attention from people who actively seek out opportunities to support a cause through mindful commerce. But to widen that market, Bombas needed a way to make the buying experience as gratifying as possible. They accomplish this by infusing the values of their brand into each step in the purchase experience and partnering with other causes outside the homeless community.

Partnerships help Bombas reach a wider audience and amplify their message their image as a socially conscious company. They’re passionate about providing not only the best experience for their customers, and the homeless community they support, but also supporting larger network of social causes. According to TriplePundit, “research indicates that 80 percent of consumers are willing to buy a product from an unknown brand if it has strong social and environmental commitments, conscious consumerism is on the rise—and this mean’s [sic] that Bombas’ marketing strategy is likely to pay off.”

Bombas promotes their network of 1,200 giving partners through their website, as well as on social media.

They use these posts to engage with customers who share in their dedication to a social cause, as well as reinforce the feeling of charity that is tied to making a purchase through their service. Where homelessness might not affect a customer directly, supporting LGBTQ+ rights or donating to underfunded schools or a local women’s shelter might. It’s important to Bombas that they’re helping their community regardless of its direct involvement with their brand mission.

Customers and partners are encouraged to share their purchases or donations using the hashtag #BeeBetter (a reference to their name, which is derived from the Latin word for “bumblebee”). The hashtag can also be used to show the product in action, which builds a running social media stream of customers who are promoting their accomplishments while promoting the Bombas brand and mission at the same time.

This grows the network of like-minded people who share in the passion for social change and helps remind customers why they’ve purchased from Bombas in the first place. The act of sharing these accomplishments also reinforces the sense of happiness and achievement that purchasing a pair of Bombas socks provides. Their one-for-one model is only as successful as it has been for Bombas because their customers continue to spread the message to their networks. These social media posts, shares, and conversations all act as social proof of the values the brand promotes.

Foster a company culture that supports the mission

Bombas does a really good job of promoting their brand mission to customers, and this is supported further by extending their values to employees. They’ve built a culture of volunteering and giving back to the community into their internal company values. Getting this buy-in from team members is important for a mission-based company like Bombas because they act as evangelists for the brand. It boosts the reach of their message and supports the idea of Bombas as a socially conscious brand.

Their one-for-one donation model differentiates Bombas from other companies in their space. Showing an internal focus on employee well-being supports the idea that Bombas truly cares. Without a company culture that actively and publicly demonstrates the company’s professed values, their message would feel disingenuous. By “walking the walk,” so to speak, they’re proving to customers that they truly believe in their social mission beyond just its marketing value.

By making their employees a priority, Bombas is fostering an internal community of like-minded individuals, as well. When a new team member joins Bombas, they become a part of the family, or hive, as the company would say. These employees can then take their knowledge of the company culture and back up the values that customers see in the real word. This helps drive the mission home for everyone involved, and solidifies Bombas as a socially conscious brand.

Involving employees directly in the company’s mission gives them a reason to evangelize the product. When the team can talk honestly about the values their company promotes, it builds credibility and trust in the brand. That kind of employee advocacy can carry more legitimacy than any traditional marketing from Bombas.

Bombas took the successful buy one, give one social impact model of companies like TOMS, Bixbee, WeWood, and Figs and applied it to socks. By focusing on a mission that affects their customers and their communities, the company has taken a mundane and utilitarian item and given it the ability to effect social change. In the process, they’ve built a thriving, $50 million/year business.

► Make values a part of the brand

Bombas built a successful eCommerce company selling a single type of product. They did that by taking socks, a clothing item that’s an afterthought for many people, and elevating them into something that customers would talk about with friends by attaching a social mission. Without the strong mission statement and value proposition, Bombas would not have been able to accomplish this.

► Know the impact of your product

Goldberg and Heath knew that socks were the most requested item by homeless shelters before starting their company. By figuring out how their product could have the most impact before moving forward, they were able to build a community of like-minded customers faster. Their product helps customers make an impact on a cause that they are passionate about.

One-for-one brands work only if customers buy into the cause. Bombas used their social media presence and marketing to find a group of people who shared their passion. With a mission-based brand, you need to make sure that customers are engaged with the company values as well as the actual product being purchased.

► Build a culture of shared values

Having employees that are truly engaged with the mission will add credibility to your brand. They’ll also act as evangelists, speaking about the benefits of the product with more legitimacy than any marketing collateral.

► Stick to what you know

Bombas makes socks. By creating a product that is engineered to fit their mission as well as the customer’s needs, Bombas has grown to $50 million in sales in just 5 years. When you know you have a product that fits the market’s needs, it’s important to stick with it.