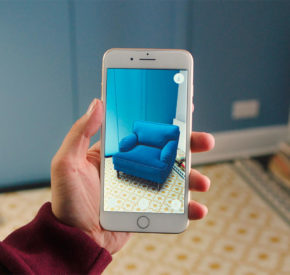 When Facebook bought virtual reality startup Oculus for $2 billion in 2014, it was thought to herald a new era: Surely the popularity of VR would soar and everyone would soon be spending their time in a Ready Player One-like world of total immersion.

That isn’t quite how things panned out. Over the past few years, virtual reality has continued to appeal primarily to a niche of early adopters while its less flashy sibling, augmented reality (AR), has taken off.

According to eMarketer, more than 59 million Americans are expected to be using AR at least once a month by the end of 2019, up from 31 million in 2016. This rapid adoption has been fueled in part by AR’s approachability: Whereas virtual reality overtakes everything, augmented reality simply adds digital layers to the real world—a far less daunting and jarring experience.

AR has also been helped by the fact that it doesn’t require a clunky headset or any specialized hardware, and can be enjoyed using something already owned by most consumers: your smartphone. This has made it possible for AR to be easily incorporated into popular experiences such as Pokémon Go and Snapchat Lenses.

The mainstream adoption of AR has huge potential for eCommerce firms. From showcasing products more robustly to building stronger customer relationships and enhancing the checkout process, the technology can improve the shopping experience in many ways.

What exactly can AR do? How is it already being used by savvy retailers and consumer brands? To make the theoretical benefits of augmented reality more, well, real, here are seven examples of the technology in action:

Warby Parker‘s mobile app is the perfect example of how augmented reality can help eCommerce firms.

The offering solves a difficult and important problem for the direct-to-consumer firm: how to show an online shopper exactly what its glasses would look like when worn.

The company relies on Apple’s ARKit development platform to make the experience fast and easy. Simply open the Warby Parker app on an iOS device, click the try-on feature, and see in real time exactly how different pairs of glasses fit.

2. IKEA: See how furniture would look in your house

Of course, it’s not just wearable products that people struggle to visualize when shopping online.

Place from IKEA solves a similar problem as Warby Parker’s app, but for home goods consumers. Users simply need to scan a room with their mobile device and pick some products from the digital catalog. The AR app—which was also built on Apple’s ARKit development platform—then presents true-to-size, three-dimensional representations of the pieces in the space.

The 3D Room Designer from Amikasa is essentially the same as IKEA’s Place: Consumers scan their spaces, pick out furnishings, and see what the pieces look like in context.

What’s different is that Amikasa is a platform that showcases products from many companies, not just one. This makes it a good example of how AR can be used by multi-vendor eCommerce platforms, not only retailers selling their own products.

How does Amikasa incorporate pieces from different suppliers into its augmented reality experience? Fairly easily, actually. The company just asks vendors to send over multiple photos of each product as well as accurate measurements. The rest is all handled behind-the-scenes by the platform.

The usefulness of augmented reality is not limited to only showcasing a few static products. As Brow Try-On from Benefit Cosmetics shows, AR can also improve the customer experience by helping consumers filter through a large number of nuanced options.

The tool, which is provided both within Benefit’s app and on its website, lets shoppers interact via a photo or video and play with a huge range of different eyebrow styles, shapes, and colors in order to find a perfectly tailored look. The brand then suggests the products and services—such as local eyebrow waxing locations—that can turn the digital concept into reality.

While most of the current uses of augmented reality by brands are focused on the discovery and research phases of the customer journey, those are by no means the only uses for the technology.

As the Adidas ComplexCon AR Experience shows, AR can also help in areas like brand loyalty and checkout.

The Experience came about because the firm was struggling with a hard-to-navigate issue: Its super fans were getting crowded out of limited-edition shoe drops by the ever-growing resale market. To combat this, Adidas created a unique experience for the ComplexCon convention, whereby attendees could only purchase products by walking around with the event-specific app and scanning augmented reality-signs. Everything from learning about the sneakers to checkout and providing pick-up details was handled within the app, making the entire process faster and more enjoyable for its most loyal audiences.

One of the things that has dissuaded some brands from diving into augmented reality is the belief that it’s necessary to build an entire experience from scratch.

That’s not actually the case. In fact, there are a number of platforms with AR capabilities that firms can piggyback on top of.

For example, take a look at the the partnership between Levi’s, Disney, and Snap. As part of a special promotion, shoppers at the Levi’s Store in Walt Disney World’s Disney Springs could scan a Snapchat code, try on a digital version of a special denim Mickey Mouse hat, and then purchase the real item.

With its Snapchat AR integration, LEGO went much further than Levi’s and Disney: It opened up a clothing store with no clothes in it.

As part of an effort to promote a new adult clothing line, the brand had consumers go to a special location, walk around, and snap codes in order to be taken to different parts of a virtual store.

The effort was part marketing stunt and part sales tool, using augmented reality both to create a buzzy experience and to actually show off real products.

This LEGO AR offering is interesting for a couple of reasons.

First, the combination of a physical location, scannable codes, AR-lenses, and a completely digital store shows that augmented reality and virtual reality can overlap. While the two are indeed different—one is wholly immersive and the other uses the real-world as its foundation—the line between the two is likely to keep blurring over time as AR incorporates more digital layers and VR becomes more realistic.

Second, the ambition of LEGO’s effort highlights that there is quite a bit of opportunity for AR to grow. Already, augmented reality can help firms better present products, create more engaging customer experiences, market in fresh ways, and add new twists to the sales/checkout process. That’s just the start: As the technology improves, and as firms get more confident and creative, AR could not just enhance, but truly transform, nearly every aspect of eCommerce.

There are a lot of reasons to be excited about virtual reality, but for eCommerce stores in 2019, it’s augmented reality that holds more immediate promise. Pioneering online stores are already using AR to deliver better shopping experiences to consumers.