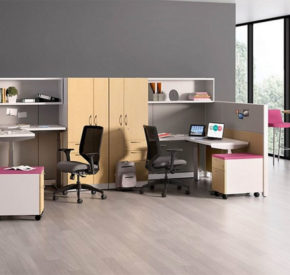 atWork is a group of office furniture dealerships based in Ontario, Canada with showrooms that sell both locally and nationwide. Through its eCommerce website, atWork is one of the few Canadian companies that allows customers to purchase commercial-level furniture like they’d purchase anything else online—without going back and forth on quotes or dealing with complex purchase agreements.

atWork signed up for Jilt when they were hunting for a solution to recover abandoned carts. “The automations were awesome,” says Rodney Lover, atWork’s Director of Sales & Marketing. But while Jilt handled atWork’s abandoned cart recovery emails and some of its other automations, the company was still using a different service to send their broadcast emails, like sales announcements and newsletters.

Eight years into their email marketing efforts, atWork had evolved and they needed things like targeting and better analytics—as Lover says, he needed features that would “compliment the focus on eCommerce we had grown into.” Those features weren’t offered on their current platform, so they felt they were being held back.

“In some ways, I had FOMO,” he says, noting how he saw other eCommerce companies were able to offer better recommendations by syncing their order data with the product recommendations in their emails. He also wanted to start using more personalization and segmentation in atWork’s emails, to send more targeted offerings based on customers’ company size, needs, and purchase history. “I lacked segmentation [and] personalizations I could implement easily,” he says.

The timing worked out because, as Lover was considering upgrading atWork’s email strategy, Jilt launched the beta of Broadcasts. Lover saw the chance to unify all of their emails under one roof and “it was a no-brainer to move to Jilt—customer service was so good!”

Lover was confident that Jilt’s broadcast email functionality would be right for what he was looking for—specifically the eCommerce features like product recommendations and segmentation.

Switching email providers can be a cumbersome process, but Lover decided it would be worth it. “Knowing the usefulness of Jilt’s other offering [with automations], and the deep team [at] SkyVerge, I had confidence they would offer an easy-to-use, robust email solution,” he says, “So I wanted to make the right decision for long term ROI.”

Bringing his list over from his previous broadcast email provider also turned out to be less difficult than imagined. “[Jilt’s support lead] Tabitha helped me super well,” he says, “I really appreciated the hand holding in the transition.”

Lover found his switch to Jilt paid off right away. Not only was the migration significantly smoother than he’d feared, atWork’s new platform for broadcast emails provided everything he was looking for.